Who did what for Israel in 1948? America Did Nothing 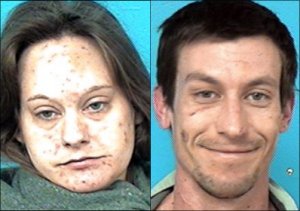 This is an everyday story as parents of young children are hauled off to jail and their sick kids to foster care. In this case the young children, ages 5 and 11, live in Bristol, Tennessee. Besides the meth charges, Tara Glover, 29, and Marcus D. Glover, 35 were also charged with child endangerment.

Police were serving a warrant on another person for previous methamphetamine related charges and found the remnants of new operation and "allegedly received consent to search the home, locating precursors of meth production in a bedroom. At that point both the Glovers were taken into custody." Police also found five trash bags with more toxic waste from previous cooks and had to call in a special clean up squad.

At least the Glover's children were at school when the search was conducted. The Department of Children's Services were contacted and grabbed the kids. Police were attempting to find Sandra Kent wanted on charges of manufacturing meth. She was arrested on previous meth charges. With friends like this...

On 02/01/12, officers of the Johnson City Police Department arrested Lucas Schropshier, 18 yoa, (W/M) of 906 W. Watauga Ave., #113, Johnson City, TN. Mr. Schropshier was charged with Possession of Schedule VI drugs for Resale after an investigation by officers of a strong odor of marijuana coming from his apartment. After consenting to a search of his bedroom, Mr. Schropshier was found to be in possession of approximately 1.5 oz. of marijuana, digital scales, and a large quantity of plastic baggies. He is currently being held in the Washington County Detention Center in lieu of an $11,000.00 dollar bond. A court appearance has been set for him to appear at the Washington County Justice Center at 0900 hours on 02/02/12.