The Bristol Herald Courier (Dec. 20, 2017) that concealed carry permits have hit new records in my hometown of Norton and Wise County Virginia.

According to www.legallyarmed.com the process can be done by mail and involves:

Pass a criminal background investigation.
Supply a copy of your DD-214 showing you were discharged under 'honorable' status.
Supply a passport photo for the license.
Pay a five (5) year license fee of $117.00.

While Bristol Virginia-Tennessee and the surrounding Tri-Cities regions have the lowest crime rates than any of any urban region of either state regardless of among the highest poverty rates, it begs to question why?

Why do poor whites engage in much smaller amounts of violent crime than the general black-Hispanic populations if poverty is the driving factor behind crime as the social engineers claim?

And no surprise the crime rates actually went down as poverty went up since 2007 so what gives? Yes the job losses proportionably hit blacks harder as Hispanics continue to push them out of the labor force, but by far larger numbers whites have lost their jobs. Whites are simply not as criminal prone as low-achieving non-Asian minorities.

There are several reasons. Yes minorities even here engage in a disproportionate amount of crime, but overall there's not enough of them to turn the whole region into another urban war zone. Yes public housing here like elsewhere are crime-ridden and concentrate the crime in a small area. Tri-Cities is partially urban.

While some stats say there's 88 guns for every 100 Americans here it's more like 150 guns per 100 residents. We have a lot of veterans and they know how to use guns. Being semi-rural we have guns for hunting, etc. Everyone of my neighbors including myself own multiple guns and none of us hunt.

It's known to most criminals the severe risk they are taking to break into homes here in particular if anyone is at home. Several have been shot dead or wounded in recent years. Two feral black males were shot dead in Roanoke trying to break in on residents, one of them with the gun a disabled veteran.

Unlike minority communities we still have enough church and family structure left to mitigate some of the social problems infecting the lower class, but that is reaching a breaking point. In the next few years may tell the difference as destructive social and economic policies of Progressives tear society apart.

Most important or bad depending on how one sees it is poor whites are not seen as victims nor is these self-destructive behaviors tolerated. At the same this blinds the public to some legitimate social ills that need addressing.

The large out-migration of young people and a large welfare system defuses many explosive social problems. A lot of welfare is often aimed at the elderly.

In minority dominated third-world cultures in our urban areas most of their young people seldom leave or can be educated by the liberal education system so the pressure cooker blows off steam with rampant street violence and sometimes full scale riots. Law enforcement refuses to intervene or can function in most cases fearful of being called racists while here the few destructive whites we have are dealt with swiftly.

Both Saturday morning handgun safety and carry permit classes were full. A case containing handguns was nearly empty, and a lone rifle for sale rested on the wall. A sign near the front of the (local gun) store proclaimed the absence of certain types of ammunition.

Shooters Edge was busy...That story has been repeated over and over at gun shops across the state and nation. The Tennessee Bureau of Investigations filed 379,209 different background checks for gun permits from January to November 2012, according to statistics kept by the bureau. 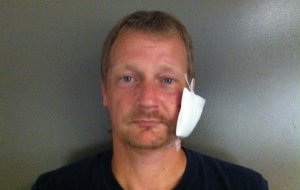 August 19, 2013 An early morning home invasion in Washington County, Virginia, has resulted in the suspect being wounded and fleeing the scene. According to Washington County Sheriff Fred Newman, the incident occurred at a residence on Fiesta Drive at approximately 7:25 am this morning.

According to the victim's statement, a lone male came to the door of the residence. Once inside, the suspect produced a knife and requested medication. At that point, the victim retrieved a handgun and shot the suspect twice in the face and shoulder. The suspect fled in an older model, dark green with gray bottom, Dodge Dakota.

The subject wanted in the home invasion that occurred on Fiesta Drive has been identified and has turned himself in to Washington County, Virginia, authorities.

Lenville W. Wilson, age 38, of Cave Creek Road, Abingdon, VA, has been charged with robbery and abduction. He is being held in the Southwest Virginia Regional Jail in Abingdon without bond.