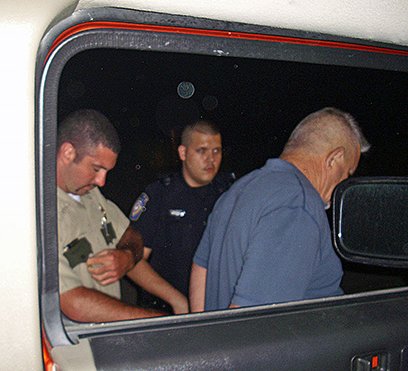 This picture almost landed a 12-year-old girl in jail!

WJHL TV 11 (July 11, 2008) reported that Johnson County deputy Starling McCloud arrested Scott Conover for "unlawful photography." To quote the press, "the cell phone photographer says the arrest was intimidation, but the deputy says he feared for his life." They (WJHL) failed to mention other facts in the case. This was not a mere traffic stop. There's no such law about taking a picture of a cop on a public street. The cop claimed Conover had a laser pointer, but it was only the picture he wanted that was taken on an IPhone, which has no such thing as a laser pointer. When Conover tossed the IPhone to his 12 year-old daughter and she took a picture of McCloud, he threatened the child with arrest too.

Another blogger Carlos Miller filled in the missing details.

Scott Conover was from Key Largo, Florida and moved to Johnson County five years ago. He didn't stand for the intimidation and disregard for the Constitution that some Tennessee Counties such as Sullivan and Johnson engage in and had been in fights with the Johnson County sheriff before.

Conover witnessed deputies as they "beat the shit" out of a man in front of his bar. He acted as a witness for the victim, and they demanded to know why he was involved. That cost the county an undisclosed amount in a closed settlement. According to Conover, "They were wolf-packing my customers. They would lie and wait for them to leave and then pull them over to see if they had been drinking." He was suing them over this tactic and it was in front of his bar (Jammers Rocking Road House) where the so-called "traffic stop" occurred.

Conover rolled down the window and said, "Hey fellas, I'm just getting your picture." He snapped the picture, then Deputy McCloud (on the force only 18 months) went crazy. Keep that in mind, now here is the rest of the news report.

The deputy also asked Conover to delete the picture three times. "He said if you don't give it to me, you're going to jail," said Conover. Under the advice of the Johnson County attorney, the sheriff would not comment and the arresting deputy said he didn't want to incriminate himself by talking to us...the deputy said he saw something black with a red light which he thought was a threat. Conover was also arrested for pointing a laser at a law enforcement officer...In a witness statement by a Mountain City officer, it says the deputy asked about the picture rather than looking for a laser...

Update: Carlos Miller says, "I talked to Scott Conover this morning and he said they delayed his court appearance to Sept. 3rd, which sounds familiar because they kept doing the same thing in my case. (I was arrested last year for photographing cops against their wishes). In my case, I took it as a sign that they were hoping the delay would cause the media interest to die down." Conover wasn't the only person targeted by this nonsense it seems. Let's keep it in the news. View the police report here (pdf file) that has nothing to do with any laser pointer and McCloud only demanded the picture be deleted.