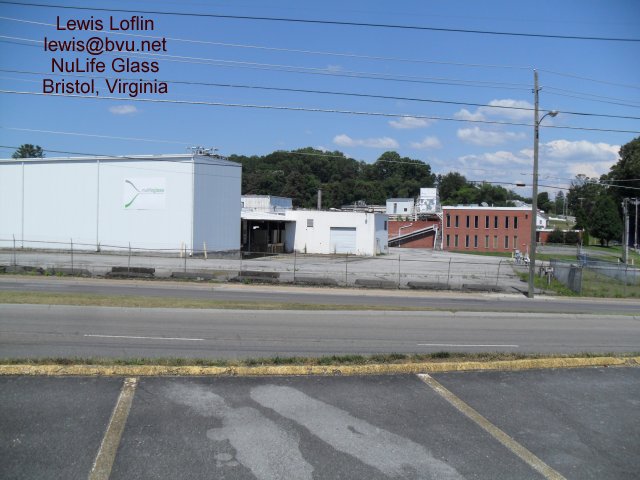 Update July 2017: I warned about Nulife Glass and predicted it was a scam. In June they fired the few people they hired and left Bristol with between 20-30 million pounds of CRT glass - glass loaded with lead. Press reports claim Bristol is trying to sue the company but likely will get stuck with disposal. They sold a $1.3 million building for less than $200,000 and half of that was payed for by grants.

This is directly across the street from the Bristol Virginia Mall and on three sides are residential neighborhoods that objected to this nonsense.

April 10, 2015 the Bristol Herald Courier has revealed some troubling details about Nulife Glass at their ribbon cutting ceremony.

Their toxic waste recycling facility that will recover lead from old CRTs and picture tubes will produce two products: metallic lead that goes for about $.40 a pound and lead-laced toxic slag that they claim will be sold and used in building materials.

Who in their right mind would want toxic slag in their home's foundation?

The process will crush the toxic glass, mix it with other materials, and be melted down in the electric furnace at several thousand degrees - that's a lot of energy.

But now we find out the furnace won't even be built for at least a year yet the first truckload of toxic waste is arriving on April 10. In fact they haven't even passed state environmental regulations or licensing requirements. To quote,

"Receiving tubes and preparing it for being furnace-ready starts tomorrow [today]. The furnace will be built, but could take up to a year. The principal part is the paperwork. Building it takes six weeks, but the paperwork takes months ... The air permit is for the furnace technology, which is not built yet. We don't start to build it until we have the permit and that process takes about a year."

The press claims the company is supposed to hire 46 workers but evidence elsewhere calls this and question and it's not only the year or more it's going to take to build the furnace - if ever.

The following was pulled from the company's own website of what's been going on back in England where the company is based:

As shown by the company's own ad it will take nowhere near 46 workers to operate this thing even when completed unless we have 41 people doing office work and unloading trucks. And while city officials claim this will pay an average of $39,000 a year per job, in the past most of the jobs will be $10 an hour little more than a dollar an hour above Wall-Mart.

We have to be careful of these claims where the majority of workers are earning $10 an hour is averaged against upper management often making six figures to distort the real earnings figures. This is to justify public subsidies and allow politicians bragging rights at election time. In the past these claims have often proved bogus.

More controversial is the dirty underhanded way this company got into Bristol. The 12 acre site formerly housed a dairy products company and is surrounded on three sides by residential neighborhoods. It also sits directly across from the Bristol Mall which "has lost anchor tenants Belk and J.C. Penney and a number of smaller retailers, while a number of once-prominent nearby restaurants have closed over the past decade."

Who in their right mind would locate a toxic waste recycling company in a residential area?

In addition the entire process was hidden from the public until the deal was signed. In fact when the Bristol Herald Courier showed up at what was supposed to be a public hearing city officials and company management called closed session, locked themselves in back rooms, and signed the deal.

This isn't the only deal that's been going on that could turn Bristol into a toxic waste dump. Another company recently obtained a permit for shredding tires which have brought complaints from other residents.

Also in the past Bristol Virginia went into the trash dumping business. Other communities would pay to dump their trash in the Bristol landfill as a sideline industry for the city coffers. That went under when Sullivan County across the state line got the business.

But getting back to our friends at Nulife Glass. From www.nulifeglass.com we have Simon Greer, who invented the technology and is president of the company:

"The process is robust and all glass supplied to Nulife is destined for our own furnaces where we extract lead to be sold to sustain our future. Nulife's plans are, wherever possible, to acquire sites as it has done in NY which it will own for all stages of the process which means that no landlord will be at risk for abandoned stockpiles of speculatively accumulated waste CRT glass...

The business plans are to buy and open new sites to meet demand which means that there is no issue of long term capacity. The more sites that open, the more we can reduce delivery costs for our clients..."

Again this business is supposed to be profitable with 41 office workers and huge energy cost by selling scrap lead at $.40 a pound? The real money according to reports from The New York Times is companies are paying $200 a ton to get rid of old CRTs and picture tubes. That might make it profitable to a point to a company taking the waste.

Last year, two inspectors from California's hazardous waste agency were visiting an electronics recycling company near Fresno for a routine review of paperwork when they came across a warehouse the size of a football field, packed with tens of thousands of old computer monitors and televisions.

The crumbling cardboard boxes, stacked in teetering rows, 9 feet high and 14 feet deep, were so sprawling that the inspectors needed cellphones to keep track of each other.

The layer of broken glass on the floor and the lead-laden dust in the air was so thick that the inspectors soon left over safety concerns. Weeks later, the owner of the recycling company disappeared, abandoning the waste, and leaving behind a toxic hazard and a costly cleanup for the state and the warehouse's owner.

As recently as a few years ago, broken monitors and televisions like those piled in the warehouse were being recycled profitably. The big, glassy funnels inside these machines — known as cathode ray tubes, or CRTs — were melted down and turned into new ones...

With so few buyers of the leaded glass from the old monitors and televisions, recyclers have collected payments from states and electronics companies to get rid of the old machines. A small number of recyclers have developed new technology for cleaning the lead from the tube glass (Nulife?), but the bulk of this waste is being stored, sent to landfills or smelters, or disposed of in other ways that experts say are environmentally destructive.

So instead of recycling the waste, many recyclers have been storing millions of the monitors in warehouses, according to industry officials and experts...Each one can include up to eight pounds of lead...

Over the past decade, environmental regulators have promoted "take-back" programs to persuade people to hand in the more than 200 million old televisions and broken computer monitors...More than 290,000 tons of the high-tech castoffs are now directed away from landfills and toward recyclers each year...

Roughly 660 million pounds of the glass is being stored in warehouses across the country, and it will cost $85 million to $360 million to responsibly recycle it...

And why would Mr. Greer even bring up this issue of relieving landlords of the threat of being stuck with mountains of leaded glass? Because the reputation of this industry is very negative which is why the process was hidden from public view to begin with.

This is not to question the integrity of Nulife Glass who if successful would provide a great service. But the up and downs of the E-waste industry should make us wary of these deals. We will just have to wait and see. Below is part of another report on the chaos in the E-waste industry that Bristol wants to become the center of.

In a move bound to have ripple effects throughout the industry, a pillar of the e-scrap world has announced major closings in Canada and the U.K.

Sims Recycling Solutions (SRS), the e-scrap division of publicly traded Sims Metal Management, announced the sudden closures on Tuesday. All three of SRS' Canadian sites will be closing – accounting for nearly 300,000 square feet of processing space – and "a substantial portion of SRS in the U.K." will also close, the initial announcement reads.

Steve Skurnac, SRS' president, explained the decisions in greater detail in an email to E-Scrap News:

In Canada, the recycling of e-scrap is effectively controlled by the manufacturers through a virtual monopoly organization, EPRA, that sets volumes and pricing. Without the ability to effectively manage inflows and recycling rates, it is difficult for any recycler to support investment in technology, capacity and quality standards...

It is not yet known which of Sims' U.K. facilities will close. The company website lists locations in Cheshire, Middlesex, Dumfriessire, Stockton-on-Tees, Glasgow, Gwent and Warwickshire...Sims recently closed facilities in Texas and New Jersey as part of larger consolidation efforts in the U.S. It was not widely known that the company was considering further closings.