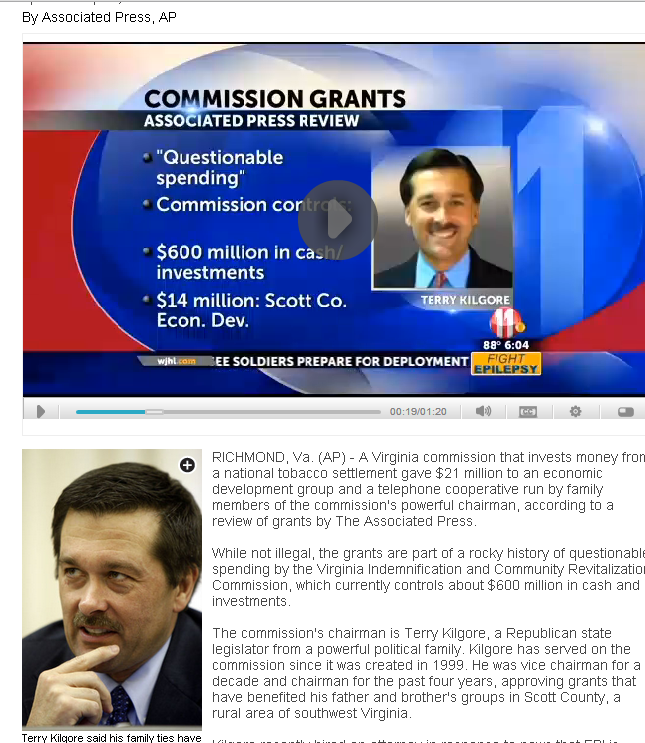 The extracts below from the AP is just another example of what this website and writer have said for years in letters to the editor, etc. I need to add something to the report below that has escaped the press. Note this section:

The federal scrutiny of the commission began after the June resignation of Phil Puckett, a Democrat. After a public outcry over his possible job offer at the commission, Puckett withdrew his interest in the position.

Terry Kilgore appeared to be the driving force behind the job offer, according to internal commission emails.

"I'm not aware of the genesis of this idea, but Terry asked us to speak to you when you're available," Tim Pfohl, the tobacco commission's interim executive director, wrote to Puckett about a week before he resigned from the Senate.

Puckett's resignation came during a months-long battle between Republican lawmakers over whether expanding Medicaid should be in the state budget. Puckett's departure gave Republicans enough leverage to force McAuliffe, a Democrat, to sign a budget that did not include Medicaid expansion.

Puckett said in a statement at the time of his departure that he was resigning so his daughter could be appointed to a state judgeship - not because he was seeking a job on the commission. The Senate had blocked her appointment because of a policy lawmakers are not allowed to put immediate family members on the bench.

While it's clear the Tobacco Commission is corruption 101 under Republican control let's not forget an incident between Gov. McAuliffe, Democrat Phil Puckett, and Bristol Virginia Republicans.

Bristol Republicans went to Phil Puckett to get him to prod Gov. McAuliffe to help them to rewrite Virginia tax laws to pilfer $100 million in sales tax collections to bail out the Falls retail development in Bristol Virginia. They simply couldn't borrow any more money (already $55 million in the red) without a state guarantee of a reliable income stream.

After the changes passed Bristol borrowed another $35 million in November 2014 and Cabela's (the anchor store for the development) pocketed a $17.5 million payoff.

While it's unclear what went on in these closed door meetings McAuliffe needed Puckett to expand Medicaid so the good Governor pushed the de-facto theft through the state legislature.

But it seems Republicans were determined to quash Medicaid expansion so when Puckett resigned for the Tobacco Commission job the good Governor got burned. That I believe was the real reason in particular Gov. McAuliffe and fellow Democrats were so determined to nail Puckett, McDonald (whose dirty dealings also involved the Tobacco Commission) and in particular the Kilgores.

This corruption goes on every day in Virginia - our ethics laws are a joke that nobody will enforce. Why would they convict Gov. McDonald for what the Tobacco Commission, VCEDA, LENOWISCO, etc. do every day?

Economic development in Southside and Southwest Virginia is mostly crony capitalism and corporate welfare. Virtually nothing is spent on human capital the really big problem in the region.

To quote their Blue Ribbon report in 2008 and is still the case in 2014 (plus millions more down a rat hole):

Their charter is vague, goals are unrealistic with no clear means of measuring success, and has no independent mechanism to assure compliance.

While the AP focuses on questions of nepotism the entire concept in total is a proven failure and the Tobacco Commission needs to be disbanded.

RICHMOND, Va. (AP) - A Virginia commission that invests money from a national tobacco settlement gave $21 million to an economic development group and a telephone cooperative run by family members of the commission's powerful chairman, according to a review of grants by The Associated Press.

While not illegal, the grants are part of a rocky history of questionable spending by the Virginia Indemnification and Community Revitalization Commission, which currently controls about $600 million in cash and investments.

The commission's chairman is Terry Kilgore, a Republican state legislator from a powerful political family. Kilgore has served on the commission since it was created in 1999...

Kilgore's brother, John Kilgore Jr. is head of the Scott County Economic Development Authority, an organization that was awarded more than $14 million in grants since the commission's inception. Much of the money has been passed on to businesses that invest in the county, but several million dollars have been spent to build a technology center that sits mostly vacant.

Their father, John Kilgore Sr., is president of the Scott County Telephone Cooperative's board, according to its website. The nonprofit that provides cable, phone and Internet to rural areas. It received more than $7 million from the commission to expand broadband access.

Note this broadband access was slated as economic development when in fact it did no such thing. To see what it went for see Broadband Disconnect in Blackwater Virginia where they installed a computer center in a cow pasture.

The cooperative paid several of its board members - including Kilgore's father - about $20,000 in 2012 for working an average of one hour a week, according to tax records. The rate of pay is significantly higher than similarly situated co-ops.

The executive director of the co-op and Kilgore Sr. did not return calls seeking comment.

The commission uses funds from a settlement against tobacco companies to stoke economic development in tobacco growing regions. It has awarded grants for a wide variety of projects - from $300,000 to build an RV park in Lee County (that was abandoned) to more than $20 million to Liberty University (late Jerry Falwell) for a medical school...

Kilgore disagreed and said he's taken steps to make sure he's in compliance with state law.

Earlier this year, he asked former state Attorney General Ken Cuccinelli, a Republican, to weigh in on whether commissioners could vote on grants to organizations represented by a firm that employed a sibling.

Side note: Attorney General Ken Cuccinelli also told the Tobacco Commission and Mr. Kilgore it was illegal to keep giving public funds to private non-profits. It's a violation of the State constitution they continue to violate.

One grant for $180,000 went to three people to help local businesses build websites. Most of those were other non-profits and the 20 or so they helped build included a Petersburg candy shop (not even in the region) and a person selling metal toy cars out of a mailbox in Galax.

Jerry Kilgore, Terry's twin brother, is a lobbyist who was hired by the businessman at the center of the corruption trial of former Gov. Bob McDonnell to help secure tobacco commission grants. No grants were ever awarded and the Kilgores have not been accused of any wrongdoing in the McDonnell case. Jerry Kilgore is a former Virginia attorney general and was the Republican nominee for governor in 2005...

As for the commission's spending, one of its biggest investments was with the Scott County Economic Development Authority to build the Crooked Road Tech Center, a large commercial space. John Kilgore Jr. said in 2010 it would help create 140 high-tech jobs within one year and its groundbreaking issued a press release saying the center would "continue to establish Scott County as a mecca for technology."

Side note: they already had a similar scam called the Pioneer Center in Duffield Virginia that failed.

Currently, the lone tenant is LENOWISCO, a quasi-government agency that has only a handful of employees. Terry Kilgore said he recently attended a meeting with a company interested in moving into the center, and he is confident it was a good investment.

"I think we will be able to bring some jobs in there," he said. (What about the Pioneer Center? That what Mr. Kilgore said before.)

Emails showed the commission was not always diligent in keeping tabs on money given to the economic development group. Last year, Pfohl asked John Kilgore Jr. to provide documentation for a partial grant spent for a proposed museum.

"We need to get that $17,500 advance documented ASAP -- it was advanced more than FOUR years ago!" Pfohl wrote.

Side note: that is what happens with their grants nearly 100% of the time. According to their own Blue Ribbon Panel 89% of their grants have never been accounted for.