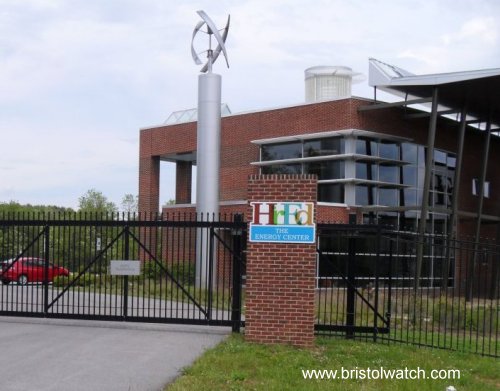 Update 2022: this project is a complete failure. Almost $10+ million wasted. There is no evidence this ever produced anything. Their website went down years ago, the local Chamber of Commerce has heard nothing from the owner since 2012. The multi-million energy "research center" in Danville has also failed.

Nothing was illegal with Piedmont Bioproducts.

Update May 2017: with oil prices below $50 a barrel and natural gas at rock-bottom prices has made this bio-fuel nonsense even more uneconomical. I warned about this in 2008.

In Virginia, the Town of Gretna and Piedmont BioProducts were awarded Virginia Tobacco Indemnification and Community Revitalization Commission grants of $5.3 million. The grants will be used to develop a biodiesel refinery in the Gretna Industrial Park.

"I can't begin to tell you what this is going to mean to the area," said Gretna Town Manager David Lilly told WPGVA.com. "This is going to be huge." The two grants include a $1.3 million for site development including grading and a $4 million grant to provide equipment for the Piedmont facility, which expects to pay $70 per ton to local growers for feedstocks that will be used to make biodiesel.

To quote one biofuel leader:

"Our whole business case is built on [the] subsidy, like the rest of the renewable energy industry. We develop our business plan in light of what the government wants-not what might be nice."

In addition many have used the climate change hysteria to gain public dollars for this scam industry. See the following:

There are severe ethics questions at the Virginia Tobacco Commission.

He was later convicted of corruption involving the TIC.

Here is another case of crony capitalism involving setting up a wholesale plant nursery with millions of public dollars to do energy research. Even if they produced anything (unknown after ten years and $8 million), there seems there was an effort to set up the State to buy the product that likely has no private sector demand.

The concept of bio-fuels was the "in" thing in energy production as speculation (and hopes) of massive increases in oil-energy prices would usher in a new era of profits for a business. www.Gigaom.com in 2008 noted 11 companies were jumping into building Cellulosic Ethanol Plants to the tune of millions in corporate welfare and subsidies. None of them produced anything.

One company, Range Fuels produced about "207 of its first 20 million-gallon-per-year" promise - it failed. They cost taxpayers $90 million. The process used wood chips, etc., not switch grass like Gretna.

In 2009, when I stumbled onto the Gretna deal, I contacted the University of Tennessee for information on their bio-fuel program using switch grass, costing Tennessee taxpayers $70 million and the Federal Government another $70 million.

They sent a nasty reply about me being a troublemaker; they didn't disclose information to private citizens, etc. Well, the truth became known to the press.

"Van Shaver got into the farming business by planting switchgrass on 90 acres...This year's crop will be fed to his cows. Four years after the state launched a $70 million initiative to build a pilot biorefinery and develop native switchgrass as a feedstock for ethanol production, farmers involved in the pilot project are still waiting for a market to develop for their crops..."

Yet within days of this documented failure, the Tobacco Commission wastes another $5.3 million on switchgrass.

A similar switchgrass scam in Kentucky ended up using it to mix with coal to burn in power plants - and it tanked too due to high cost. Even if we switched to non-food crops for bio-fuels, why would we want to destroy millions of acres of forest, etc., as a way of "saving the planet?"

Other biofuel scams include clear-cutting north Carolina forests to send wood pellets to England to burn in a power plant - with 20 percent greater CO2 emissions. Forest "regrow," so this is "sustainable."

Or like the silly scam at a Tennessee paper company that burned its waste and got bio-fuel subsidies. It's just nuts.

The Gretna process sounds like another sealed air heating process the owner claims as diesel. This basic process is nothing new, being used in Germany as early as 1898.

No biofuels I can find have ever been commercially viable unless the government artificially inflates fossil fuel prices through regulation, subsidizes it, or buys it directly at considerable losses to taxpayers.

This Gretna deal, like the other bio-fuels deals, was about government money. It's corporate welfare on steroids, and our illustrious Democratic Gov. Terry McAuliffe got in on it.

Bart Hinkle (Bristol Herald Courier, April 19, 2014) noted how corn ethanol is a great way to funnel vast wealth from the poor to the wealthy through higher food and gasoline prices.

I can testify it's a low-quality fuel forcing one to burn more of it to get the exact miles in addition to causing all kinds of problems with car engines.

Animal feed at my local farm supply has also gotten more expensive. Update 2017: with the demise of much of the biofuel industry, feed prices have dropped - related to each other is unknown. A 50-pound bag of chicken feed is under $10 in Southern States.

Half of our corn crop is squandered on ethanol with no positive returns for the environment - which is valid for all biofuels. It's simply a matter of energy density, and any industrial-scale process consumes a lot of energy.

Breaking plant fibers into sugars with enzymes converted to alcohol is energy intensive. (As is heating them to produce gasses etc.)

In this latest bio-fuel scam, something called Osage Bio Energy built a $200 million plant to make ethanol out of barley. (stupid) in Hopewell south of Richmond. Their sole purpose was government money - it failed as could be predicted.

A British company bought the equipment and was going to dismantle it and ship it overseas. In steps Virginia Del. Riley Ingram (Republican) and Gov. "let's expand Medicaid," McAuliffe pilfered millions of state dollars to stop the British company from removing the equipment.

The most expensive ethanol subsidy on the East coast to create 30? jobs.

This effort has brought protest from meat producers, etc., as this will waste valuable food and fodder, driving up their production costs. Virginia has a lot of meat production.

I'm glad to see Virginia Republicans and Gov. McAuliffe agree on something.

Started around 2007 totally on government grants it seems something called Piedmont Bioproducts is typical of the waste and lack of accountability of public money in the hands of corrupt Republicans. The Republican controlled Tobacco Commission and its members are embroiled in former governor Bob McDonald's legal problems.

That evolves around some scam to use Tobacco Commission grants to underwrite the development of a drug for a private company. Back to Gretna another case I believe needs to be looked into from an accountability viewpoint.

The January 17, 2013 announcement claims that another $5.3 million will be used to set up a facility to develop a bio-fuel refinery at another taxpayer-funded industrial Park in Gretna.

This latest $5.3 million grant comes on the heels of at least $2 million in other grants that as of 2014 shows no evidence of producing anything. I have contacted the company's owner in the past, which is a private LLC, and he can't even tell me what a gallon of this bio-fuel he supposed to be producing even cost. There's no evidence of a distributor and the following was taken off of other websites and stands as public record:

Because this is a private company the FOIA won't work.

This listing is for Piedmont Bioproducts, LLC's Single Location in Gretna, VA. The company primarily operates in the Research and Development in the Physical, Engineering, and Life Sciences Companies industry.

Piedmont Bioproducts, LLC:
Was founded in 2009 and is Privately held.
Has $320,000 in estimated annual revenue. (Who knows?)
Has 5 employees located here at the Single Location.
http://piedmontbio.com/

Delegate Danny Marshall (Republican) is also behind the waste and abuse of public funds at the Tobacco Commission which he is a member of. And here once again we have Gov. McDonald in the middle of some scam with the Tobacco Commission that helps some secretive privately held company they help create. Then Marshall introduces legislation for the taxpayers to buy the bio-fuels.

As near as I can tell because I can't get any cooperation out of either Piedmont Bioproducts or the Tobacco Commission on this is the taxpayers have spent between $10? million for five jobs and nobody can seem to prove a viable product was ever produced.

Let me clearly state to the best of my knowledge nothing illegal has happened here. It isn't illegal because politicians and government agencies simply make up rules and laws as they go along to make sure that it isn't illegal - unless someone launches an ethics investigation.

The ethics investigation of former Gov. Bob McDonnell is basically ridiculous - most politicians in Virginia should be up on charges. I have no doubt he is guilty of what he's being accused of, but this is the way politics operates in Virginia and it goes on everyday. What we need to be concerned with is stopping the entire corrupt process.

The following is a short extract surrounding the Gov. Bob McDonnell mess from the Richmond Times Dispatch July 3, 2014 as to how the Tobacco Commission is up to its eyeballs in corruption.

McDonnell's lawyers might want to question the Kilgore brothers to buttress his claim that the former governor never promised - and Williams never received - any governmet benefit from McDonnell's administration.

Jerry Kilgore, an attorney for McGuireWoods, represented Rock Creek Pharmaceuticals, then a subsidiary of Star Scientific, in seeking grants from the tobacco commission for university research on Anatabloc, Stars dietary supplement. Jerry Kilgore has said that the company missed the commission's funding cycle and did not receive any grants.

Star Scientific has since changed its name to that of the subsidiary, Rock Creek Pharmaceuticals.

In August 2011, Maureen McDonnell hosted a luncheon at the Executive Mansion to help launch Anatabloc, a supplement derived from the alkaloid anatabine found in tobacco plants that the company touted as an anti-inflammatory.

At the luncheon, Star Scientific handed out $25,000 grants to Virginia Commonwealth University and the University of Virginia. Prosecutors alleged that the grants were designed to set up the future funding of university research of Anatabloc with money provided by the tobacco commission.

A defense subpoena also was issued Thursday for Patrizio Caturegli, an assistant professor of pathology and endocrinology at Johns Hopkins University.

Jerry Kilgore, the 2005 Republican nominee for governor, declined comment on the subpoena Thursday.

Why in the hell are funds that are slated for economic development even being used for this?

The 2011 Blue Ribbon audit revealed 89 percent of their grants have never been accounted for. Their conclusion:

Grants Have Provided Benefits But Revitalization Remains Elusive;
TICR Has Made Grants With Limited Potential for Revitalization;
Well-Defined Revitalization Strategy Needed;
More Effective Governance Model Should Be Considered;
Most Awards Not Paired With Relevant Metrics.