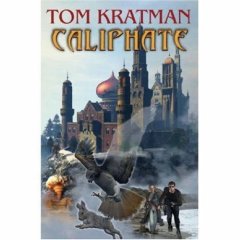 Caliphate (2008) by Tom Kratman is a superb book about life in an all too possible future of Europe under Islam, and a war of extermination with America. To quote another reader, "Don't go in unless you're prepared to meet people who consider child abuse and human slavery, two of mankind's oldest evils, to be religious duties."

To quote another reader, "The contrast between the US as we are today, and what we (will) become under such an attack (nuclear attack from Islamists) is one of my worst nightmares, and I hope, but am not very confident, that we can avoid it. I guess that will require a big change in our current political culture (not very likely at this time)." From the cover:

"Slavery is a part of Islam . . . Slavery is part of jihad, and jihad will remain as long there is Islam." -Sheikh Saleh Al-Fawzan, author of the religious textbook At-Tawhid ("Monotheism") and senior Saudi cleric.

Demography is destiny. In the 22nd century European deathbed demographics have turned the continent over to the more fertile Moslems. Atheism in Europe has been exterminated. Homosexuals are hanged, stoned or crucified. Such Christians as remain are relegated to dhimmitude, a form of second class citizenship. They are denied arms, denied civil rights, denied a voice, and specially taxed via the Koranic yizya. Their sons are taken as conscripted soldiers while their daughters are subject to the depredations of the continent's new masters.

In that world, Petra, a German girl sold into prostitution as a slave at the age of nine to pay her family's yizya, dreams of escape. Unlike most girls of the day, Petra can read. And in her only real possession, her grandmother's diary, a diary detailing the fall of European civilization, Petra has learned of a magic place across the sea: America.

Another super novel from Kratman is Watch on the Rhine he co-wrote with John Ringo. Both are superb writers.