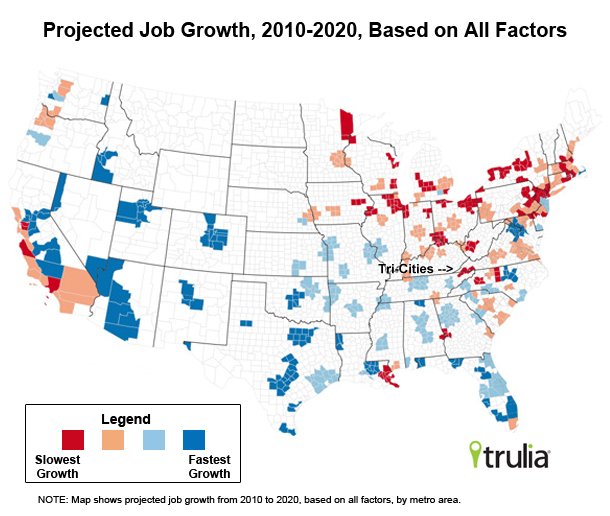 The above graphic has been proven true as of 2019. Our region is near the bottom and companies like Volvo Trucks is the reason why. Firing and rehiring the same people is not economic growth.

We get the following: "Griffith Celebrates Announcement of 777 New Jobs, Nearly $400 Million Investment at Volvo Trucks in Pulaski County". Those are rehires from an abusive company that hires-fires like clockwork.

"Since 1990, the plant has announced at least 14 rounds of layoffs. There was an announcement in December 2015, then in July 2016 and, most recently, in December 2016. The last announcement came three weeks before Christmas. The layoff will affect about 500 hourly employees, beginning Feb. 13."

Calling these "new jobs" is a lie. The Roanoke Times reports again June 27, 2019 of more layoffs at Volvo:

"Volvo Trucks expects to lay off some workers at its Dublin plant by the end of the year, winding down from a period of abnormally high productivity at the region’s largest employer...Employment at Volvo’s Dublin plant, meanwhile, surged from 1,700 workers in January 2017, to 2,600 in 2018 and 3,500 today."

If the number is true that is simply back to their old levels. Which is it Mr. Griffith? Perhaps they can hire a flood of cheap foreign worker replacements you just helped come in?

If Volvo is really hiring 3,500 workers why has the population of Pulaski County dropped by nearly 1000 (-2.3%) between 2010-2018? Same with every county in Southwest Virginia you represent Mr. Griffith.