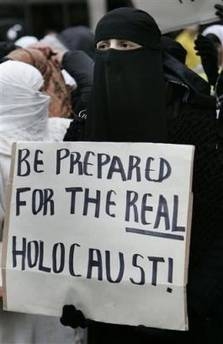 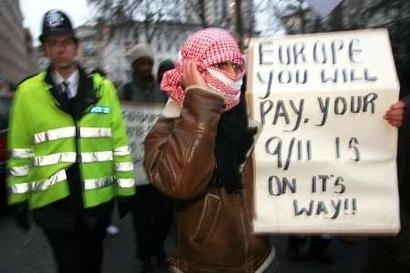 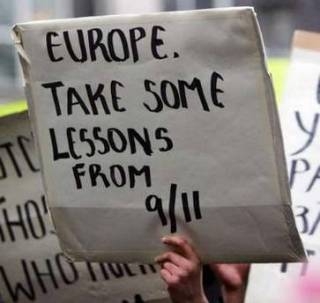 On Lou Dobbs Tonight on CNN, they showed Muslims in London. But as Lou commented, these people were inciting violence and hate in defiance of British law. Yet the British police stood by and did nothing. This is the "religion of peace" in full display. See Why Muslim Immigration Must End.

(extract) ...the fear that the country's 1.6 million Muslims are rejecting political tolerance and free speech for a violent, radicalized version of Islam. There is a real concern that British Muslims do pose a threat to that country and its traditional values...by the most comprehensive survey to date of Muslim opinion in

Britain... Forty-five percent say 9/11 was a conspiracy by the American and Israeli governments. This figure is more than twice as high as those who say it was not a conspiracy. Tragically, almost one in four British Muslims believe that last year's 7/7 attacks on London were justified because of British support for the U.S.-led war on terror.

...Thirty percent of British Muslims would prefer to live under Sharia (Islamic religious) law than under British law...Half of those who express a preference for living under Sharia law say that, given the choice, they would move to a country governed by those laws.

Twenty-eight percent hope for the U.K. one day to become a fundamentalist Islamic state. This comports with last year's Daily Telegraph newspaper survey that found one-third of British Muslims believe that Western society is decadent and immoral and that Muslims should seek to end it.

The news is no less alarming on the question of freedom of speech. Seventy-eight percent support punishment for the people who earlier this year published cartoons featuring the Prophet Mohammed.

Sixty-eight percent support the arrest and prosecution of those British people who "insult Islam." When asked if free speech should be protected, even if it offends religious groups, 62 percent of British Muslims say No, it should not..."hardcore Islamists" constitute nine percent of the British Muslim population.

A slightly more moderate group is composed of "staunch defenders of Islam." This second group comprises 29 percent of the British Muslim population. Individuals in this group aggressively defend their religion from internal and external threats, real or imagined.

The scary reality is that only three percent of British Muslims "took a consistently pro-freedom of speech line on these questions... 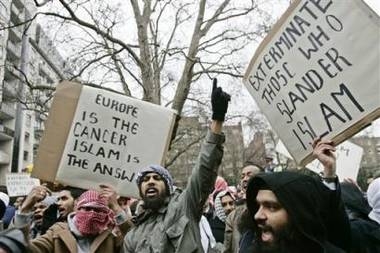 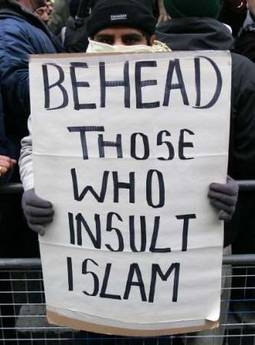 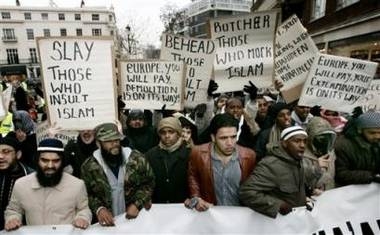 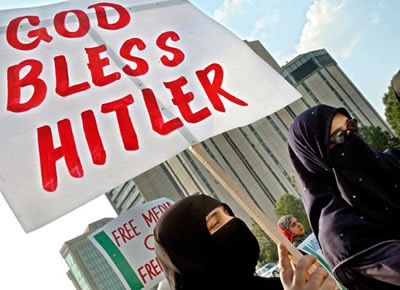 The London transport bombings of July 2005 prompted no less than eight surveys of Muslim opinion in the United Kingdom within the year. When added to two surveys from 2004, they provide in the aggregate a unique insight into the thinking of the nearly 2 million Muslims in "Londonistan."

The hostile mentality they portray is especially alarming when one recalls that London's police commissioner, Sir Ian Blair, recently said that the threat of terrorism "is very grim" because there are, "as we speak, people in the United Kingdom planning further atrocities."

The July 7 attacks: About one in 20 British Muslims has voiced overt sympathy for the bombings a year ago. Separate polls find that between 2% and 6% endorse the attacks, 4% refuse to condemn them, 5% believe the Koran justifies them, and 6% say the suicide bombers were acting in accord with the principles of Islam.

Without endorsing the attacks, far larger numbers show an understanding for them: Thirteen percent say the July 7 suicide bombers should be regarded as "martyrs," 16% say the attacks were wrong but the cause was right, while 20% feel sympathy for the "feelings and motives" of the attackers. A whopping 56% can see "why some people behave in that way." Help the police? A worrisome number of Muslims would not help the police if they suspected a fellow Muslim was planning a terrorist attack, ranging in different surveys from 5% to 14% to 18%.

Violence acceptable? Before 7/7, 11% found it acceptable "for religious or political groups to use violence for political ends" but only 4% thought so after the attacks, showing a rare improvement. Two polls turned up the identical figure of 7% of Muslims endorsing suicide attacks on civilians in Britain.

(Among 18- to 24-year-olds, those most likely to carry out such an attack, the number jumps to 12%.) How about suicide attacks on the military in Britain? Positive answers came in at 16% and 21% (with 28% of 18- to 24-year-olds). Are the respondents themselves willing to embrace violence to bring an end to "decadent and immoral" Western society? One percent, or some 16,000 persons, answered in the affirmative.

Muslim or British: Polling indicates that a majority of Muslims perceive a conflict between their British and Muslim identities. Two polls show that only a small proportion identifies itself first as a British (7% and 12%), but they differ widely on the number who identify first with their religion (81% and 46%).

All of 58% want those who criticize or insult Islam to face criminal prosecution. Schools should be prohibited from banning female pupils from wearing the hijab, say 55%, while 88% insist that schools and work places should accommodate Muslim prayer times.

Integration into Britain: In a nearly mirror-image of each other, 65% say Muslims need to do more to integrate into mainstream British culture, and 36% say modern British values threaten the Islamic way of life. Twenty-seven percent feel conflicted between loyalty to fellow Muslims and to Britain. Of those who despise Western civilization and think Muslims "should seek to bring it to an end," 32% endorse nonviolent means and 7% violent means.

Attitudes toward Jews: Polls confirm that the antisemitism widespread in the Muslim world also rears its head in Britain. About half the Muslims polled believe that Jews in Britain have too much influence over Britain's foreign policy and are in league with the Freemasons to control its press and politics.

Some 37% consider Jews in Britain "legitimate targets as part of the ongoing struggle for justice in the Middle East," and 16% state that suicide bombings can be justified in Israel. (Among 18- to 24-year-olds, that number rises to 21%.)

In sum, more than half of British Muslims want Islamic law and 5% endorse violence to achieve that end. These results demonstrate that Britain's potential terrorists live in a highly nurturing community.

Pew Poll on How Muslims Think

To find out, the Pew Research Center for the People & the Press carried out a large-scale attitudinal survey this spring. Titled "The Great Divide: How Westerners and Muslims View Each Other," it interviewed Muslims in two batches of countries: six of them with long-standing, majority-Muslim populations (Egypt, Indonesia, Jordan, Nigeria, Pakistan, and Turkey) and four of them in Western Europe with new, minority Muslim populations (France, Germany, Britain, and Spain).

The survey, which also looks at Western views of Muslims, yielded some dismaying but not altogether surprising results. Its themes can be grouped under three rubrics.

A proclivity to conspiracy theories: In not one Muslim population polled does a majority believe that Arabs carried out the attacks of September 11, 2001, on America. The proportions range from a mere 15% in Pakistan holding Arabs responsible, to 48% among French Muslims. Confirming recent negative trends in Turkey, the number of Turks who point the finger at Arabs has declined to 16% today from 46% in 2002. In other words, in every one of these 10 Muslim communities, a majority views September 11 as a hoax perpetrated by the American government, Israel, or some other agency.

Likewise, Muslims are widely prejudiced against Jews, ranging from 28% unfavorable ratings among French Muslims to 98% in Jordan (which, despite the monarchy's moderation, has a majority Palestinian Arab population). Further, Muslims in certain countries (especially Egypt and Jordan) see Jews conspiratorially, as being responsible for bad relations between Muslims and Westerners.

Conspiracy theories also pertain to larger topics. Asked, "What is most responsible for Muslim nations' lack of prosperity?" between 14% (in Pakistan) and 43% (in Jordan) blame the policies of America and other Western states, as opposed to indigenous problems, such as a lack of democracy or education, or the presence of corruption or radical Islam.

This conspiracism points to a widespread unwillingness in the umma to deal with realities, preferring the safer bromides of plots, schemes, and intrigues. It also exposes major problems adjusting to modernity.

Support for terrorism: All the Muslim populations polled display a solid majority of support for Osama bin Laden. Asked whether they have confidence in him, Muslims replied positively, ranging between 8% (in Turkey) and 72% (in Nigeria). Likewise, suicide bombing is popular. Muslims who call it justified range from 13% (in Germany) to 69% (in Nigeria). These appalling numbers suggest that terrorism by Muslims has deep roots and will remain a danger for years to come.

British and Nigerian Muslims are most alienated: Britain stands out as a paradoxical country. Non-Muslims there have strikingly more favorable views of Islam and Muslims than elsewhere in the West; for example, only 32% of the British sample view Muslims as violent, significantly less than their counterparts in France (41%), Germany (52%), or Spain (60%). In the Muhammad cartoon dispute, Britons showed more sympathy for the Muslim outlook than did other Europeans. More broadly, Britons blame Muslims less for the poor state of Western-Muslim relations.

But British Muslims return the favor with the most malign anti-Western attitudes found in Europe. Many more of them regard Westerners as violent, greedy, immoral, and arrogant than do their counterparts in France, Germany, and Spain. In addition, whether asked about their attitudes toward Jews, responsibility for September 11, or the place of women in Western societies, their views are notably more extreme.

The situation in Britain reflects the "Londonistan" phenomenon, whereby Britons preemptively cringe and Muslims respond to this weakness with aggression.

Nigerian Muslims generally have the most belligerent views on such issues as the state of Western-Muslim relations, the supposed immorality and arrogance of Westerners, and support for Mr. bin Laden and suicide terrorism. This extremism results, no doubt, from the violent state of Christian-Muslim relations in Nigeria.

Ironically, most Muslim alienation is found in those countries where Muslims are either the most or the least accommodated, suggesting that a middle path is best - where Muslims do not win special privileges, as in Britain, nor are they in an advanced state of hostility, as in Nigeria.

Overall, the Pew survey sends an undeniable message of crisis from one end to the other of the Muslim world.