"There are excellent reasons to be concerned about the vast number of illegal immigrants in our society, but their taking jobs from Americans is not one of them...What would our unemployment rate be if we had no illegal workers here? One percent? And wouldn't our inflation rate be higher without millions of people working at such low wages helping to keep consumer prices low?"

In other words, state-planned poverty, under-employment and wage suppression is good for inflation control. Dennis as a typical Republican conservative that ignores the other costs in jails, welfare, etc. He also votes for George Bush.

How elegant and simple, poverty is used as a form of wage and price control so he can continue his high standard of living at the expense of others. That is what both Federal Reserve policy and mass immigration are all about, wage suppression, just like the outsourcing of jobs.

And who pays the price for what is in reality a program of reverse Robin Hood? Black people, Mexican Americans, recent immigrants, and poor whites here in Appalachia.

This is not a just race issue, but an economics issue. They like to yell "racism" to derail discussion, but the fact is they are the racists working to keep a permanent underclass as a form of price control. This can only work for so long until social pressures explode.

I'm dead set against illegal immigration, but there's not a thing most illegal aliens do I wouldn't do myself to have a better life for my children. I worked security at a construction job where most of the workers were Hispanics, I suspected many were illegal.

They were the hardest working and most honest individuals I'd ever seen. I hit it off with one named Louis, who taught me a person with a college degree, how to properly do drywall. (I was remodeling my own house because I couldn't afford to hire anyone.) He was my teacher and I'll never do drywall as well as he could. The fact was they couldn't find nobody to do this work even paying $12 an hour. A little respect works wonders.

Don't blame the typical Mexican farm or construction worker for this mess. Blame the exploitive business owner, lazy American on welfare, the political left trying to deconstruct and destroy our borders and culture. In particular blame everyone that wants a cheap gardener, nanny, or under-priced service or product produced by people in nasty jobs they have never worked or would never work themselves.

I don't want Louis deported, but I don't want or will tolerate Mexican flags on American streets or have my country reduced to a multicultural, socialist cesspool. The people behind this are not people like Louis, but those with a political agenda that wouldn't invite Louis home to dinner. Don't blame Louis and others. If I sound harsh with Mexicans, etc. I apologize, it isn't them.

Where's the liberal press on the following? 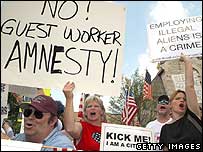 The short local news article below illustrates this problem and who pays. Note that I have substituted the correct term "illegal alien" over the politically correct nonsense such as "undocumented immigrant."

Hispanics are an ever-growing part of our community. There are some twelve million illegal aliens living and working in the United States. "Nobody is going to say yes I am an illegal immigrant most of them will not say that", says Jesse Cigarroa, a first generation Mexican American.

Most have no insurance which means often times the emergency room becomes the de facto place to go for medical help. Thanks to a new billion-dollar program emergency personnel will now be asking patients more questions about their ability to pay.

"It's hard enough that they don't know English then they have to go to the hospital expecting to receive help when they get there they getting banged getting all these questions and they get scared", says Jesse Cigarroa.

Officials say no one is going to ask an immigrant for proof of legal status. But some illegal alien health experts are concerned. "It's suspicious because there are so many anti illegal alien bills being proposed right now in congress we feel this is probably a way to sneak hospitals into identifying illegal aliens", says Holly Melendez. ETSU has set up a health coalition to study and help Hispanic illegal aliens living in the Tri Cities.

illegal aliens can go to the Johnson City's Downtown Clinic, where payments are based on a sliding scale.