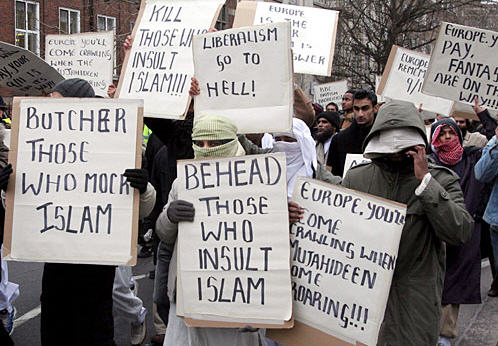 Inciting violence is against the law in England. Where's the police?
See Pictures from Londonistan

Explaining the distrust of Muslims and fear of Islam on the rise since 9/11 and offering ideas how Muslims might change these perceptions "Individual Islamists may appear law-abiding and reasonable, but they are part of a totalitarian movement, and as such, all must be considered potential killers." I wrote those words days after 9/11 and have been criticized for them ever since.

But an incident on March 3 at the University of North Carolina in Chapel Hill suggests I did not go far enough. That was when a just-graduated student named Mohammed Reza Taheri-azar, 22, and an Iranian immigrant, drove a sport utility vehicle into a crowded pedestrian zone. He struck nine people but, fortunately, none were severely injured.

Until his would-be murderous rampage, Taheri-azar, a philosophy and psychology major, had an apparently normal existence and promising future. In high school, he had been student council president and a member of the National Honor Society. A number of UNC students told the Los Angeles Times that he "was a serious student, shy but friendly." One fellow student, Brian Copeland, "was impressed with his knowledge of classical Western thought, adding "He was kind and gentle, rather than aggressive and violent." The university chancellor, James Moeser, called him a good student, if "totally a loner, introverted and into himself."

In fact, no one who knew him said a bad word about him, which is important, for it signals that he is not some low-life, not homicidal, not psychotic, but a conscientious student and amiable person. Which raises the obvious question: why would a regular person try to kill a random assortment of students? Taheri-azar's post-arrest remarks offer some clues.

A police affidavit notes that "Taheri-azar repeatedly said that the United States Government had been killing his people across the sea and that he decided to attack." He told a judge, "I'm thankful you're here to give me this trial and to learn more about the will of Allah."

In brief, Taheri-azar represents the ultimate Islamist nightmare: a seemingly well-adjusted Muslim whose religion inspires him, out of the blue, to murder non-Muslims. Taheri-azar acknowledged planning his jihad for over two years, or during his university sojourn. It's not hard to imagine how his ideas developed, given the coherence of Islamist ideology, its immense reach (including a Muslim Student Association at UNC), and its resonance among many Muslims.

Were Taheri-azar unique in his surreptitious adoption of radical Islam, one could ignore his case, but he fits into a widespread pattern of Muslims who lead quiet lives before turning to terrorism. Their number includes the 9/11 hijackers, the London transport bombers, and Maher Hawash, the Intel engineer arrested before he could join the Taliban in Afghanistan.

Mohammed Ali Alayed, the Saudi living in Houston fits the pattern because he stabbed and murdered Ariel Sellouk, a Jewish man who was his one-time friend. So do some converts to Islam; who suspected Muriel Degauque, a 38-year-old Belgian woman, would turn up in Iraq as a suicide bomber throwing herself against an American military base?

This is what I have dubbed the Sudden Jihad Syndrome, whereby normal-appearing Muslims abruptly become violent. It has the awful but legitimate consequence of casting suspicion on all Muslims. Who knows whence the next jihadi? How can one be confident a law-abiding Muslim will not suddenly erupt in a homicidal rage? Yes, of course, their numbers are very small, but they are disproportionately much higher than among non-Muslims. This syndrome helps explain the fear of Islam and mistrust of Muslims that polls have shown on the rise since 9/11.

The Muslim response of denouncing these views as bias, as the "new antisemitism," or "Islamophobia" is as baseless as accusing anti-Nazis of "Germanophobia" or anti-Communists of "Russophobia." Instead of presenting themselves as victims, Muslims should address this fear by developing a moderate, modern, and good-neighborly version of Islam that rejects radical Islam, jihad, and the subordination of "infidels."