Have the Islamists won?

From the beginning Danish Prime Minister Rasmussen has tried pandering to Muslims even though their uncalled for violence has nevere relented. Now Rikke Hvilshoj, not wanting her children in danger, is getting out. This all started because of fear of Muslims to begin with.

Update Nov. 24, 2007: Danish Prime Minister Anders Fogh Rasmussen on November 16 continued talks on a new platform for his minority centre- right government, which will include a new immigration minister to replace Rikke Hvilshoj, who said she will leave parliament after the next term and vacated her cabinet position. Rasmussen said he "regretted" her decision had to be taken, but gave no further details on why she was leaving.

Hvilshoj in June, 2005 was the target of an extremist group which said it said fire to her car to protest the government's policies on immigration. Hvilshoj, her husband and two young children were rescued from their house, which also caught fire as a result of the attack. A group calling itself "Beatte Without Borders" said it carried out the attack, condemning the government's "racist immigration policy". She and other senior politicians were assigned guards. Rasmussen promised in his campaign a softer approach to asylum-seekers, including allowing some families with children to live outside asylum centres.

The Danish government had introduced some of Europe's toughest restrictions on immigration, leading to criticism from Europe's human rights watchdog, the Council of Europe. The centre-right government insisted the measures are right and fair. Ref: http://www.neurope.eu/articles/80191.php

Yet Muslims still refuse to understand what this is all about, that totalitarian Sharia Law will not be tolerated in a free society. There is nothing to discuss; freedom of speech overrules Sharia. What does IslamOnline.net have to say?

(Extract) COPENHAGEN, February 11, 2006 (IslamOnline.net) - Danish imams have criticized Immigration Minister Rikke Hvilshoj's call to exclude some of them from integration dialogue...the Danish Muslim delegation who visited Muslim countries, told IslamOnline.net. "We are in a dire need now to open a direct dialogue to listen to each other without barriers."

Twelve blasphemous cartoons of Prophet Muhammad were published last September by Denmark's mass-circulation Jyllands-Posten. Angered by the Danish government's lack of response to their protests, Danish Muslim leaders toured a number of Muslim countries with a 43-page dossier, including the 12 cartoons and three other pictures that had been sent to Muslim e-mails by anonymous people. Hvilshoj said on Wednesday, February 8, that the government would exclude imams who took part in the tour, accusing them of whipping up anti-Danish anger. "I think we have a clear picture today that it's not the imams we should be placing our trust in if we want integration in Denmark to work," Hvilshoj told the Berlingske Tidende newspaper.

...Imams who took part in the tour had frequently said they only embarked on this trip after their appeals to the government and the newspaper at issue fell on deaf ears. The Muslim minority, estimated at some 180,000 people, had sued the newspaper, but the lawsuit was rejected by a local court on the grounds of freedom of expression. Muslims have then taken their case to the attorney general and threatened to raise the issue before the European Human Rights Court. Also at the outset of the crisis Danish Prime Minister Anders Fogh Rasmussen refused to meet the ambassadors of eleven Muslim countries, including heavyweights Egypt, Turkey, Iran and Indonesia, to discuss the crisis.

...A total of 58 percent of Danes surveyed in a Megafon poll released Thursday, February 9, said the Danish imams were responsible for the worldwide protests while 22 percent blamed Jyllands-Posten. A further 11 percent of 1,033 people polled put the blame on Middle East governments. Just five percent of respondents felt the responsibility lay with the Danish government. An overwhelming 82 percent said they believed that the imams were hampering immigrants' integration, while a mere six percent said they were helping the process.

Denmark Decides Free Speech Has Limits In World With Terror; Many In Europe Debate The Balance Of Security And Personal Freedom Washington Post - September 3, 2005 (edited extract)

Said Mansour believes Muslims have a right to kill Americans in Iraq because, "This is war; it's not a picnic." He had no qualms about downloading and making CDs of Internet videos depicting beheadings in Iraq and speeches by Abu Musab al-Zarqawi, the terrorist mastermind behind much of the Iraqi insurgency.

As is typical of many Muslims, he is on welfare: "He said he had come to Denmark in 1983 to join a sister who lived here. He married a Danish woman the next year; they now have four children who attend public schools. His wife is a public school teacher, but Mansour said he was unemployed and collected a monthly government welfare benefit of about $1,800." If he spent less time with jihad and would act Danish, (and wasn't just lazy) he could be employed. To quote, "Mansour, who arrived for an interview in long Muslim robes and sandals, insisted on praying before speaking to a journalist."

Now, Danish police intend to make Mansour, 45, a Moroccan-born Danish citizen, the first person ever charged under an antiterrorism law enacted in 2002 that forbids instigation of terrorism or offering advice to terrorists..."We have to look at reality," Rikke Hvilshoj, Denmark's minister of refugee, immigration and integration affairs, said, noting that some have abused Denmark's free speech guarantees to encourage violence and killing. "The day we don't have freedom of speech, the fundamentalists have won," she said. "On the other hand, we can't be naive."

France, with Europe's largest Muslim community - 6 million people - recently announced plans to strengthen its anti-terror laws, already among Europe's strongest. Britain now plans to ban or deport those who incite terrorism, close bookshops or places of worship used by radical groups and criminalize speech that "foments, justifies or glorifies" terrorism. Human rights groups and Muslim civic leaders called those measures too broad. "What may be seen as a glorification of terrorism by one person might be seen as an explanation of the causes of terrorism by another person," said Azzam Tamimi, a senior leader of the Muslim Association of Britain. (Note that Tamimi, a so-called Palestinian, openly advocates terrorism.)

A recent survey found that 80 percent of Danes supported the new laws to battle terrorism and control immigration. In Britain, 73 percent polled by the Guardian newspaper in mid-August said that they were willing to give up some civil liberties to improve security. 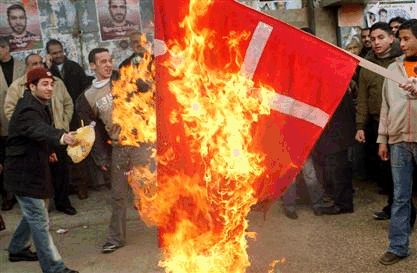 Gaza Arabs burn the Danish flag,
while living off welfare provided by the EU and US.

A new population forecast shows that birth rates among immigrant women have dropped from four to 2.4 children. The fall in proportion is due to the older age of women immigrating to the country. There are also fewer immigrants from the lesser developed countries.

Fact: According to the 2004 FBI hate-crimes report, the latest published, there were 156 incidents of anti-Muslim hate crimes; in comparison, there were 95 anti-Christian, and 954 anti-Jewish attacks in the United States. Rather than fear American freedom, most Muslims embrace it. At more than $42,000, average income for Muslim families is higher than the American average.