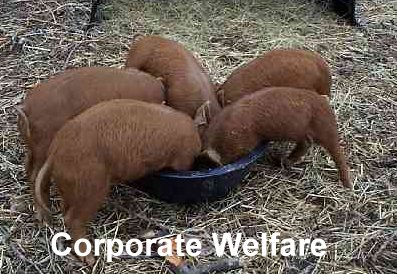 WireTough Cylinders is another example of crony capitalism bought and paid for by tax dollars. The research was taxpayer funded and the products they are supposed to produce are viable only if further government meddling creates a market for them. And, oh yes, China doesn't undercut them.

I must emphasize that WireTough Cylinders LLC has done nothing illegal, it's simply the mindless pork-barrel waste of tax dollars hatched up in back rooms by government hacks that's being questioned here. Why should my property taxes be used to subsidize a private business?

According to their website (www.wiretough.com) this company was established it seems with government money in 2003. To quote,

...With NASA R&D funding and university collaboration, key technologies were developed, including a damage tolerant composite for lightweight field armor application. A patent is pending. Also developed was a light weight, wire reinforced pressure vessel for hydrogen storage at 10,000+ psi.

If the public paid for the research, then why doesn't the public own it? Besides the tax dollars used to underwrite this so-called research, where's the market for hydrogen cylinders? If this is related to the over-hyped green energy industry then the use of hydrogen in vehicles has already failed. It's simply not cost effective unless oil hit perhaps $500 a barrel.

Won't happen as US oil production continues to increase and vast new fields of oil and oil shale coming on line from Israel, the US, and Canada. That's right, Israel is poised to become as big an oil producer as Saudi Arabia. New technology will open up the extraction of billions of tons of oil from shale.

So with no real actual market for hydrogen cylinders, so what about natural gas for fleet vehicles? That is already widely available and there's no way they can beat China on this even with a superior product. So this effort to invent a new manufacturing industry for Southwest Virginia is economic nonsense without government subsides or continued attempts by environmental leftists to destroy more cost effective traditional fuels.

But to further quote,

WireTough Cylinders, LLC, is located in the beautiful town of Bristol, Virginia in Washington County. Officially incorporated in 2010, the Company acknowledges the financial and organizational support from the Southwest Virginia Higher Education Foundation.

So why is this "startup" company relying on government handouts? Why are public officials in the poor rural community of Washington County (operating behind closed doors) giving them $38,000 to by a used fork lift? They are supposed to be "renting" space from a local company known as Zenith Fuel Systems LLC and it seems it's an effort to bail them out. Their business according to reports is down badly due to the economy. They make carburetors.

And what was that "financial and organizational support from the Southwest Virginia Higher Education Foundation"? It was a $521,500 grant from the Virginia Tobacco Commission that was written up falsely as "research" when in it seems the real goal was to provide backdoor funding for WireTough Cylinders LLC. So they have "plans" to invest $1.6 million over three years and "hire" 18 people? One would think that since 2003 they would have hired somebody for the amount of taxpayer largess they've been given.

To buy these cylinders visit www.americancng.com. According to them a Type 1 150 liter, 13.5 gal. cylinder costs $1,620 and weighs 369 lbs. 90% of gas cylinders world wide are Type 1. A Type 2 148 liter, 12.3 gal. tank from WireTough Cylinder costs $1,620 and weighs 267 lbs. A high pressure cylinder Type 1 from China cost from $100-$300. A similar price difference probably exists for Type 2 cylinders. WireTough is supposed to ship the first units December 2011. I really hope this latest "taxpayer investment" works this time.

The rest of this is quoted from their website and the Tobacco Commission. Can I see a list of those jobs WireTough Cylinders LLC?

In late 2010, the Virginia Tobacco Indemnification and Community Revitalization Commission approved the funding of research and development for WireTough Cylinders allowing them to begin the pilot project operations in Southwest Virginia and to achieve the needed regulatory approval. The company has intellectual property from a pending patent application for the production of a cutting edge cylinder style. Additionally, the general type of cylinder they are producing is of a type with very little domestic competition.

What about China? While it seems they can produce a superior product, China produces good products at far less cost. This is how they are destroying the domestic wind and solar industries. This is the grant number from the Virginia Tobacco Commission underwriting this so-called "startup."

CEF is another pseudo-government agency used to disburse pork dollars to the politically connected. www.prweb.com (2/2/2012) has 'invested' another $200,000 in this company. This article points out how government is poised to create an industry that would never fly if left to real market forces. To quote,

CIT President and CEO Pete Jobse said, "WireTough's innovative fuel-efficient CNG storage tanks demonstrate the economical technology needed to in order to reduce our dependency on natural resources. With our investment, WireTough will become the forefront of transportation manufacturing."

Jobse also noted the market opportunity for the company with last year's executive order signed by Virginia Governor Bob McDonnell that sets out his state's alternative fuel plan. During that signing ceremony, McDonnell said, "As we continue on the path toward making Virginia the 'Energy Capital of the East Coast,' it is important that we pursue all practicable and cost-effective options to promote the use of alternative fuel vehicles. Increased use of alternative fuel vehicles holds the potential to help reduce our dependence on foreign oil, support the expansion of private-sector businesses and create new jobs here in the Commonwealth."

If they hold so many patents then why are the taxpayers funding their research for more patents? When does this ever end? Is there any real private investment in this company?

The state nonprofit fund that supports Virginia tech companies is facing steep cuts from the General Assembly, setting up a potentially jarring financial reduction after a banner year. The House and Senate have cut Gov. Bob McDonnell's funding proposal for the Herndon-based Center for Innovative Technology and its GAP Funds program, though the budget has yet to be finalized.

The CIT GAP Funds is in the middle of a record stretch. Since July, the group has doled out funds to more than 20 startups - topping any year since its 2005 founding. About half of those deals closed since the beginning of this year. That's in large part due to record funding. This fiscal year, the group has had $6 million at its disposal: $4 million in state appropriations and $2 million in stimulus cash from the Department of Energy...

McDonnell proposed in his two-year budget to keep CIT's funding level at $4 million for both fiscal 2013 and 2014, but both the House and Senate have taken their own, more tight-fisted route.

The two-year spending plan put forth by the GOP-controlled House would put about $3 million for each of the next two years into CIT Gap Funds. The Senate's plan is more complicated. It would grant $4 million to the fund in fiscal 2013 but eliminate funding in the second year. That could change, however, depending on whether the $1.2 trillion in automatic federal budget cuts are triggered in 2013...

Automatic federal budget cuts have in fact been triggered and as of March 2013 we don't know what is going to happen. While Republican rail against Solyndra and other silly political deals, they have no problem with taxpayer funding of their friends and associates. As for WireTough Cylinders they have dropped off the radar since their public funding.