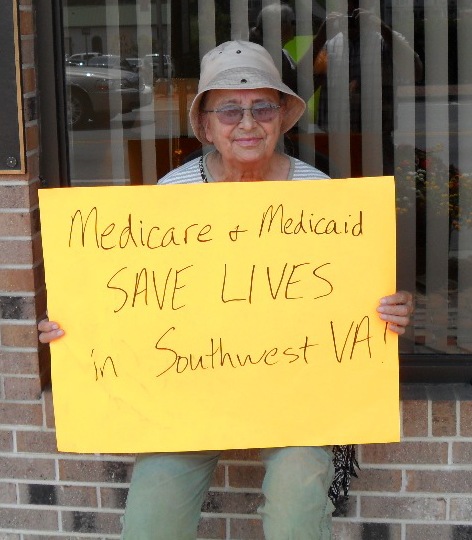 Protestor at the office of Congressman Morgan Griffith

Virginia Organizing on Friday, August 3, picketed in front of Congressman Griffith's office in Abingdon. I was there and gosh it was hot! This is in regards to protecting Medicaid and Medicare from the budget axe. See Protestors at Morgan Griffith's Abingdon office at WJHL TV.

My message was somewhat different than Brian Johns, head of Virginia Organizing in this area. He is a great guy and a good friend. To quote Brian from the Bristol Herald Courier:

"This is the 47th birthday of Medicare and Medicaid, and we're encouraging the congressman, especially given how important these programs are to Southwest Virginia, to cast votes protecting them instead of harming them."

According to Mr. Griffith's press secretary he believes the Affordable Care Act (Obamacare) "would harm these programs and is the wrong approach to making improvements to the nation's health care system." He support Medicare and Medicare in a district where more than two-thirds of the residents use the service.

We do need reform and the status quo and Obamacare aren't the answer in my opinion. The politicians are having an ideological food fight acting like a bunch of spoiled brats. Here is just one issue to consider that I presented to Mr. Griffith's office.

"In the early 1980s, about 10 percent of the federal budget went to Medicare and Medicaid. Now, it's about a quarter of all spending, and it's on the way to 33 percent of all spending unless something happens to change the trend..."

One issue to address this is price fixing to keep affordable drugs off the market. Many large pharmaceutical companies pay their competitors not to market low-cost or generic drugs, claiming this is a way of reducing patent infringement lawsuits. This is an issue I will bring to the attention of Mr. Griffith that congress should outlaw such anti-competitive practices, but if congress doesn't act, then perhaps the Supreme Court just might.

My understanding of this is one company will create a drug that does the same or similar thing as a costly patented drug (chemical equivalent), but the formula is different. That makes it a different drug, but instead of suing a competitor and lose and allowing free-market capitalism to work for once, they simply buy-off the competition.

This case involved the pricey anti-biotic Cipro whose maker Bayer paid $400 million to Barr Laboratories among others to keep their lower priced generics off the market until Bayer patent expired.

Federal Trade Commission chairman Jon Leibowitz has opposed what is called "pay-for-delay settlements" scam, but Congress does nothing as usual. This must be some of those government regulations Wall Street Republicans want to protect us from.

It would seem a business executive's dream: legally pay a competitor to keep its product off the market for years. Congress has failed to stop it, and for more than a decade generic drug makers and big-name pharmaceutical companies have been winning court rulings that allowed it.

Until this month. On July 16, a federal appeals court in Philadelphia issued a decision that the arrangement is anticompetitive on its face. It potentially sets up a confrontation before the United States Supreme Court. If it were to accept the case, the outcome could profoundly affect drug prices and health care costs.

The Philadelphia ruling by the Third Circuit Court of Appeals conflicted with decisions from at least three other federal circuit courts, giving the Supreme Court a strong reason to hear the case within the next few years...

For the whole story see For Big Drug Companies, a Headache Looms.

Why in the world has Congress not been dealing with this? It's price fixing and is supposed to be illegal. Both political parties have ignored this despite the fact taxpayers are the largest payers for drugs through Medicare and Medicaid. To further quote,

Last year, the Congressional Budget Office estimated that a Senate bill to outlaw such payments would save the federal government $4.8 billion over 10 years and would lower drug costs in the United States by $11 billion. The legislation remains stalled in the Senate. The federal government is a major buyer of drugs through Medicare and the Department of Veterans Affairs...

Generic and brand-name drug companies vehemently deny that their agreements are collusive and contend that they are simply a way of settling patent fights...

It's amazing all of those "free market" Republicans and "for the masses" Democrat socialists are silent on this. Just like in Bristol when it comes to real issues that impact the average person both parties are identical.

While Mr. Griffith is in the House, this issue of costly, over priced prescription drugs and corporate abuse across the whole healthcare spectrum needs to be front and center of healthcare reform.

For more information on Virginia Organizing visit www.virginia-organizing.org. The above information I submitted to Mr. Griffith's office.