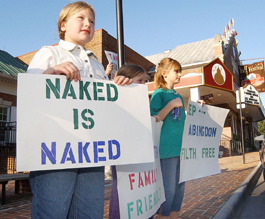 Nudity Our Tax Dollars at the Barter Theatre

When Barter Theatre in Abingdon decided to run Liquid Moon that featured a nude scene, they opened the door to controversy. Outraged religious conservatives attacked the nudity while state Sen. Phillip Puckett held up a state grant in protest. While some accuse him of being a "local Taliban," nobody seems to question why state funds that are supposed to go to job creation are being used to underwrite a fancy theater many local residents can't afford to attend.

May 18, 2004 the Kingsport Times-News reported the "concern" of state senator Phillip Puckett over the "nudity" while he was/is part of the fraud and scandal-ridden Virginia Tobacco Indemnification and Community Revitalization Commission. As part of its Southwest Virginia Economic Development Committee he votes for endless pork and waste in the region that produces nothing of permanent or public value to the community at large.

He held up $100,000 pork dollars that was going towards the Stonewall Square project at the Barter Theatre. While he questions "moral values" he doesn't question the latest round of government waste where he/others continues to divert economic development money to payoffs for his friends. To quote, Mr. Puckett, "My concern is not against (the Stonewall project), but my vote is against the morality of what I have registered my complaint against (to Mr. Rose)."

The press claims, "Stonewall Square is a proposed 2.3-acre development that would be located directly across from the Barter Theatre. The development would offer retail space for local crafters, artists and other traditional-type retail establishments that developers say could add 75 to 120 new jobs to the region." As of 2011 that has proven to be another lie and was only the pretext to bail out the Barter Theatre and its politically connected supporters. In 2011 they are in money problems again as we shall see.

The Barter Theatre was seeking to bilk the Tobacco Commission for $100,000 to help finance some storm drainage infrastructure along with the Appalachian Regional Commission porking out $100,000 in federal dollars and the Town of Abingdon is considering allocating $50,000. They got it all the last I heard.

November 28, 2004 the Kingsport Times-News reports then U.S. Sen. George Allen, R-VA., another porker Republican, announced that the National Endowment for the Arts was wasting $153,000 of which $18,000 was to support the production of the new play, "The Other Side of the Mountain," by Catherine Bush. It flopped and produced nothing of value for the community.

All of the 167 seats were filled. To quote, "Liquid Moon" is about a married middle-aged writer named Ryan, played by Michael Poisson, who falls for a much younger fan named Kelly, played by Elizabeth McKnight." There's a scene where she enters naked. Ryan has a problem marriage, and tries to keep sex out of the relationship with Kelly. Typical is Rev. Ronald Gilbert Director of Missions Lebanon Baptist Association, to Mr. Rose I assume of Barter Theatre:

I am writing to inform you that in the annual meeting of the Lebanon Baptist Association at Cedar Bluff Baptist Church in Atkins, VA, on Friday, Oct. 17, there was a motion made and passed unanimously to send you a letter expressing the displeasure of the messengers present regarding the recent actions of the Barter Theater in displaying public nudity on stage. The maker of the motion also encouraged the messengers to not attend and support the Barter Theater until such time as the theater changes its policy

The public while not questioning the misuse of tax dollars, but was sure up in arms on both sides of the nudity issue. In Local Taliban targeting Barter Times-News May 22, 2004 Charles Lewis of Wise, VA. rails,

Re. "Dispute over Play Content Delays Decision on Barter Theatre Grant," my God, members of the legislature are now trying to exert censorial control over the costume department at the venerable Barter. The local Taliban, it appears, is alive and well in Southwest Virginia. Mullah Puckett should be reminded that we are living in a nation which takes pride in its democratic institutions, and that it is the enlightened 21st century in which we are living, not the puritanical 17th.

Thanks to the artistry of courageous directors like Richard Rose, good theater is also alive and well in the area. My advice to Puckett and all the other repressed mullahs in the Virginia legislature is very simple: insist, if you must, that your wives and daughters protect their modesty by donning the hijab and chador while attending the Barter, but for heaven's sake please do leave the costuming of the actors to the artistic director.

Anna Proffitt Cook of Abingdon, VA. rails, "Protest something else." To quote,

I couldn't believe it when I saw all that energy wasted protesting "liquid moon." How come no one protests the theaters? The movies are full of violence and some form of nudity, but I don't see anyone holding signs there. If you don't want to see the show don't go. It's that simple. stay home. Instead you have your children out there. what nonsense. You don't have to go see the show

There are so many bad things happening in our country right now. We will most likely be sending our troops back to war. A war that was supposed to be over, and yet our troops and England's troops are dying at an alarming rate. Shame on all of you for picking something so minor to protest when there are so many things where you could have put your energy and children's energy to better use. Shame on all of you!

The Barter Theatre, located in Abingdon, Virginia, opened on June 10, 1933. It is one of the longest running professional theatres in the nation. In 1933, when the country was in the middle of the Great Depression, most patrons were not able to pay the full ticket price. Robert Porterfield, founder of the theatre, offered admittance by letting the local people pay with food goods, hence the name "Barter".

In 1946, Barter Theatre was designated the State Theatre of Virginia. Many well-known stars of stage, screen and television have launched their careers at Barter, including Gregory Peck, Ernest Borgnine, Patricia Neal, Ned Beatty, Hume Cronyn, Gary Collins, Frances Fisher, Kevin Spacey, Larry Linville and Wayne Knight. On The Lot winner Will Bigham acted at Barter Theatre for many years before pursuing a film career alongside his wife Catherine Gray.

In 2008 the Barter Theatre celebrated its 75th anniversary. Located in the wealthiest community in Southwest, Virginia, it's part of a vast system of taxpayer-funded amusement parks for the local rich. It was also in financial trouble even with taxpayer bailouts.

Since 2008 the Barter Theatre has had endless financial problems due to decreasing government handouts.

Please support the Barter Theatre. Visit their website at www.bartertheatre.com.