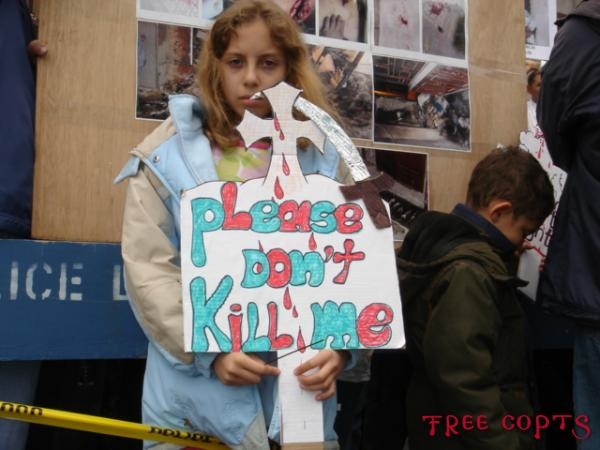 Christian pleads for violent Muslims not to murder her.

Honor Killings of girls-women in Islam

The subject of "honor killings" in Muslim society is a touchy issue. This is the practice of men murdering their wives, sisters, daughters, etc. if they violate or even seem to violate various social taboos. It should be noted that Muslims are not alone in this and it happens in other violent third-world cultures including among Christians and Hindus.

But in the West, the problem is overwhelmingly Muslim, in particular in Europe. The situation is made worse because under "multiculturalism," often racist' leftists want these native (Muslim) culture retained and not have immigrants assimilate into society. They were after all imported to sweep the streets. This problem is outside violations of Muslim law (Sharia) that calls for death penalties for anyone (man or women) converting to another faith or for a woman marrying a non-Muslim.

Italy Is Roiled by Murder of a Pakistani Woman and Other Violence Involving "Immigrants" August 23, 2006 New York Times

On Aug. 11 of Hina Saleem, a 20-year-old woman whose family moved here from Pakistan was found buried with her throat slit. Hina had been killed because her traditionalist Muslim father objected to her Western lifestyle. "She smoked and wore revealing, low-slung jeans like many young women...News reports said she had been living with an Italian man." Under Islam it's death for a Muslim woman to have relations with a non-Muslim man, married or not.

The body was found after her boyfriend reported her missing. Her father, uncle and two other men were involved, all Pakistani. "She was always happy," said Multani Gurmail, her boss at the Antica India restaurant, where she had worked as a waitress. "I knew she had some problems. I didn't realize how bad they were."

This killing along with others has opened a debate on what happens to the children of Muslim immigrants that want to be Italian, German, or American, and not Muslim like their parents want. Local Muslims and her mother claimed Islam had nothing to do with it.

Her other crimes according to her mother, "She stayed out without explanation, we never knew where she was and with whom, she was simply a daughter who did not obey," Within days a young Italian woman was found dead in a Brescia church. A Sri Lankan immigrant was arrested.

On Aug. 21, a Morocco immigrant was arrested and charged with killing a notable painter, and a Pakistani man was knifed to death during what appears to have been a robbery. It hard to tell much from the news report because of the liberal stance and political correctness of the New York Times.

Berlin Germany is the home of 200,000 Muslims, mainly Turks. Berlin has been plagued by "honour killings" of women and girls at the hands of relatives. The reasons vary from opposing arranged marriages with relatives to leaving Islam or dating a non-Muslim boy.

Yet the Muslim authorities go to great pains to claim it's not Islam, but refuse to denounce it or stop it. The worst outrage is the refusal of German, Dutch, etc. authorities to equally enforce civil laws against Muslims. Muslim women don't deserve the same treatment of non-Muslim women. All of this is in the name of "multiculturalism." When the victims seek help from authorities, a Berlin social worker put it this way,

"It's natural that when something happens, people think we should respond. But it's not always the right thing to hold special events at these times, and then for it all to stop again. Our job is to explain Islam...

Excuse me??? Why is it a Muslim women isn't worth protection from violent Muslim culture? If we continue to allow these people to immigrate into the West, it's our way or the highway. That means they live under western laws and that the west equally enforces them.

Christian families in the town of Taibe were forced into the streets, had their homes firebombed, and had to flee to neighboring villages for protection as the violence raged into the night. No one was injured in the attack, despite the fact that the PA police took hours to respond to calls for help, according to reports.

The crowd of Muslims descended on the town a few days after a Muslim woman was allegedly killed by her family for having become involved in a relationship with a Christian from Taibe. The offending woman was forced to drink poison and then quickly buried earlier this week.

In the Kingdom of Jordan, the law states that family members who carry out honor killings are "totally exempt from sentence." Between 28 and 60 such murders are estimated to take place annually in that country. The Palestinian Authority also permits these killings...