Summary: Florida educators struggle with failing non-Asian minority students forcing them to rig tests so most can pass and receive a diploma. Business struggles with worthless diplomas, but face civil rights charges if requiring passing a literacy test for a job.

The Orlando Sentinel is reporting that the Florida Standards Assessments for grading student achievement are once again being rigged. Trying to maintain some semblance of integrity without failing most of the students is a continuing struggle. To quote,

"The State Board of Education by a 6-1 vote approved a scoring plan for the new Florida Standards Assessments, or FSA, that makes the new series of exams harder than its predecessor. It could mean more than 40 percent of students fail most of the language arts and math exams this spring.

But it turned back a call for an even stricter "cut scores" - the lines that divide passing from failing - that could have led to failure rates that topped 60 percent."

One weasel board member whines,

"We're not talking about cut scores. We're talking about kids. If we get the cut scores wrong, that means there are kids, all of whom are our responsibility... who won't be advancing."

But what good is advancement if a student can't do the work? Other reports claim over two-thirds can't read. Then they face a backlash from parents over their children's lack of ability and even get sued for racism because low-achieving non-Asian minorities, which is what the real problem is, can't pass tests students in Utah pass every day.

All of this goes back about 15 years with struggling to deal with black and Hispanic students that can't do the work. Business is demanding literate workers, thus real education standards. Not happening. Note this nonsense:

"But the board's vote still will greatly affect Florida's nearly 2.8 million public school students. FSA scores will help determine promotion from third grade, class assignments and whether students earn high school diplomas...The new A-to-F grading plan makes it easier for schools to earn good grades than in 2014, requiring 62 percent of points instead of 66 percent to earn an A, for example.

But because the percentage of students doing well on the FSA exams will likely fall, the grades for 2015 are expected to be very similar to the previous year's. Under Florida's 17-year-old school grading system, schools are judged largely on how students perform on state tests."

In other words tampering with the test so failing students can pass as opposed to setting clear standards and demanding they meet the standards or no diploma. Thus way no can an employer even trust the worth of a diploma, but if they dare demand a reading test of potential employees they could face civil rights charges with large scale black and Hispanic failure is revealed. That's the dirty secret the press avoids. 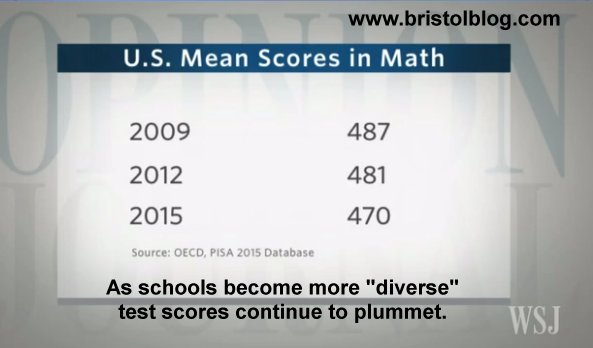 The declines directly track not only in Florida, but in the nation in general as schools become dominated by third-world immigrants, Hispanics, and blacks. Florida schools are now 3% Asian, 32% Black, 30% Hispanic, and 42% white. PISA at the top illustrated in Fig. 1 and yearly declines in Fig. 2.

2014 is typical with 45% of 10th graders failing reading on one test, then 49% failure on another, even with this funny grading system. The failure rates vary by test, but are massive on all even with watered down testing standards. What are they doing in Florida schools? These failures track the percentage of non-Asian minorities. Florida scored 481 on the 2012 PISA scores little changed in 2015 I assume.

Real immigration enforcement will remove millions of failing students and their families from our school systems saving billions. "Current immigration policy costs taxpayers $300 billion a year" according to National Review, Sept. 22, 2016. Arizona saved $300 million a year dealing with non-English speakers when thousands of illegal aliens "self-deported" when they started enforcing their immigration laws.

The real problem is student ability varies and it varies a lot. They need to come to grips with this and have an honest discussion. Outcome equality is impossible and yelling racism won't change that.