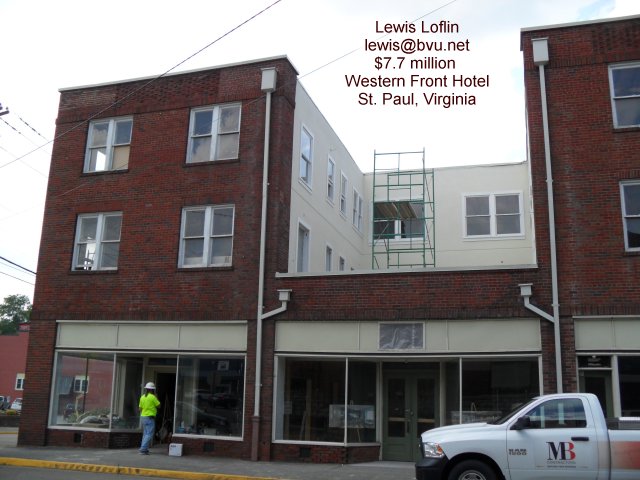 St. Paul, Virginia is another dying coal town in Wise County where I grew up. Despite new four-lane highways and millions of dollars in government grants poured into the County, we have almost nothing to show for it. The highways are useful for quickly exiting the community seeking viable employment elsewhere.

$7.7 million will be used hole to rebuild what will become the Western Front Hotel. Problems seem to have begun almost from the beginning as workers found that the structure was unsound and dangerous. It should have been torn down to begin with. Touted by public officials as promoting tourism, this stands as another example of taxpayer-funded nonsense.

"Developer Creative Boutique Hotels (CBH) held a groundbreaking ceremony this month for the 33-room Western Front Hotel in downtown St. Paul...The hotel will be developed utilizing the former Willis and Dye buildings. In addition to guest rooms it will include a restaurant and music venue; rooftop dining; a rooftop bar and outdoor entertainment spaces."

Developer Creative Boutique Hotels (CBH) thinks this is a great deal (at least for them) in a town with no money and no jobs in Wise County ranked near the bottom in every social demographic one can think of. CBH has done nothing illegal, but government stupidity is another issue.

According to press reports Gov. Terry McAuliffe is handing out a $250,000 grant from Virginia's new tourism "porkbarrel" development fund. Additional funding includes more misuse of funds from the Department of Housing and Community Development and Appalachian Regional Commission. Throw in federal tax credits and low interest loans from VCEDA and the Virginia Tobacco Commission, this may end up like the Ralph Stanley House in Clintwood Virginia that defaulted in a similar taxpayer funding scam. Those loans were written off and we have nothing to show for it.

The structure was in such poor shape they had to employ "200 jacks" and two tractor-trailer loads of materials just a shore up the walls. In addition many of the floors were found to be rotted out. Didn't anybody bother to check any of this out before we handed out the largess? This project is not about jobs or rebuilding a abandoned building, it was about the money and getting the grants.

It's likely this project will be another permanent drain on public resources to be propped up by grants. This is the reason why the tens of millions of dollars poured into communities such as Wise County produce nothing for the average citizen. Reference Bristol Herald Courier March 19, 2017.

To quote how the Tobacco Commission operates in 2010,

"To date we've seen about 350 Tobacco Region Opportunity Fund (TROF) transactions as it appears today in your book on page 53. Forty percent of those that have come to us and the deal never makes it.

The other half either repaid some money because they fell short or they negotiate some relief or they flat out default on their obligations. These are not good numbers but I want you to know that this is what's happened in the TROF program but its gotten better..."

Then Gov. now Senator Warner and VCEDA in 2005 is typical:

All of these have failed in some cases in just months after opening. Nowhere near 500 new jobs ever existed and the money disappeared.