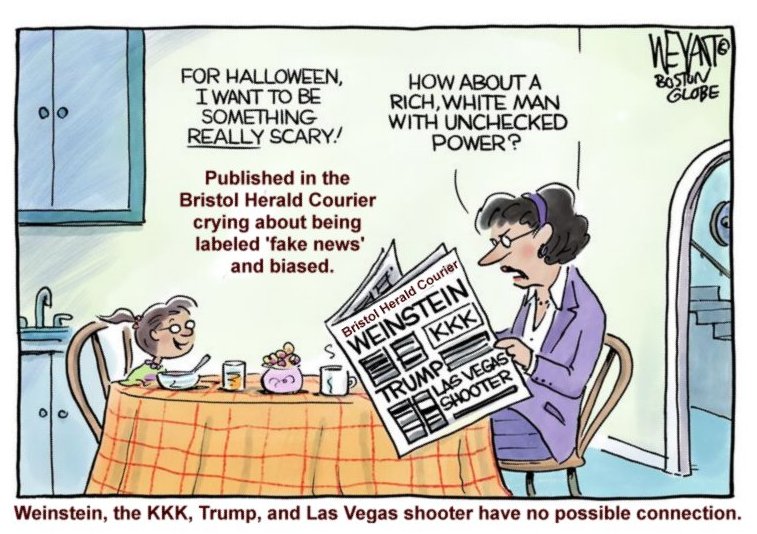 Note the cartoon above has been altered as a parody.

"Progressive views on women, race, immigration and climate change should not be treated as opinion...How do you not 'take a side' on climate change, bigotry, the dehumanization of undocumented immigrants?"

Ms. Valenti is an example what is wrong with journalism today - they spew Progressive dogma and politics and not facts or news - what we tend to call "fake news". Polls show journalists are virtually all Democrats thus follow the socialist economics and identity racism politics that dominates the party.

Of the 100 largest newspapers 57 endorsed Hillary, 4 endorsed Trump. In 2013 only 7.1% of journalists identified as Republican, I'd say zero today.1

We want facts not Progressive politics passed off as news. Facts only, please.

Enter Bristol Herald Courier, Our View, "Enough with the 'fake news' labels Trump" The press has become offended and oppressed. They've gone from reporting facts to manufacturing or republishing political narratives, then snowflake out when called on it.

The editorial cartoon on the very page of this rant proves the Bristol Herald Courier is once again racist, biased, and bigoted and has done this a number of times attacking not only Trump, but broad swaths of their declining readership and millions of us "deplorable" Americans they disagree with.

They mixed Trump in with Harvey Weinstein, the KKK, and the Las Vegas shooter. None of these four entities have any relation to each other, but the Herald Courier editorial board engaged in libel while hiding behind the claim of "press" - this kind of abuse brings calls for stripping the "press" of their legal protections.

The mother in the cartoon says, "How about a rich white man, with unchecked power?" Let's talk about a "rich white man" named Warren Buffett that owns the Bristol Herald Courier and most newspapers in Virginia that "echo-chamber" the "fake news" Washington Post owned by another "rich white man" Jeff Bezos - a total lack of diversity of ideas from rich white men with a political agenda.

The Herald Courier complains, "The proliferation of the 'fake news' label has extended far beyond social media...Accusations have even hit us locally." I'm here to call them out on that very issue.

Allcott and Gentzkow define "fake news" to be "news articles that are intentionally and verifiably false, and could mislead readers." They attempt to exclude disreputable media practices and bias from the definition. 62 percent of US adults get news on social media, while 65% distrust the mainstream media and that concerns me. Print media influence in the 2016 election was down to 8%.2

I define "fake news" as articles designed to create false, biased, narratives with partial facts filtered through a Progressive filter, censor pertinent facts by omission, block discussion through editorial censorship, that is ideologically slanted, and designed not to give facts, but stoke emotion and sway public opinion. This skirts the fringes of propaganda and yellow journalism.

I never rely on social media for news. I'm usually forced to research the article to get at most of the facts outside of the slanted narrative.

Here is an example of the "fake news" narrative. The Herald Courier, and national press ran months of hysterical and false news stories of police hunting down black men for sport and shooting them. They censored the massive levels of black violence and criminal culture that leads to disproportionate numbers of police confrontations and arrests. That's the discussion we need.

That lie led to the murders of police officers, riots, and the Lakeem Scott incident on the Volunteer Parkway - "fake news" has become lethal. The Bristol Herald Courier by "regurgitating" these lies could incite outright violence and murder in my opinion.

Yet the ruling elite and their press propaganda news outlets are in a panic to regain the narrative. Congress in crafting a censorship bill over "fake news" - Google, Facebook, and Twitter already actively suppress content under a similar guise of "fake news" that doesn't meet their ideological approval or political correctness. What is the Herald Courier' view on censorship?

The Bristol Herald Courier whines, "But even with diligent, verifiable substantiation...the problem of denial persists." The press engages in using each other as sources producing an ideological echo-chamber. They rely on approved ideological sources such as the discredited Southern Poverty Law Center, various Democrat Party special interests, political activists, etc. Again the Alt-Left-Progressive echo-chamber - spare me any more unnamed sources.

The "press" has no special right not to be criticized and fact-checked themselves - or to be trusted. You are not another in the long line of offended victims. The Bristol Herald Courier and its staff can decide to be real journalists or simply snowflakes and a mouthpiece for a "rich white man" and his minions.

Gallup polls reveal a continuing decline of "trust and confidence" in the mass media "when it comes to reporting the news fully, accurately, and fairly."

Trust in Mainstream media: Democrats 52%, Republicans ~18%, overall ~35%. 65% of the public doesn't trust the mainstream media. 62 percent of US adults get news on social media - that's scary.

Above is quick navigation of websites.