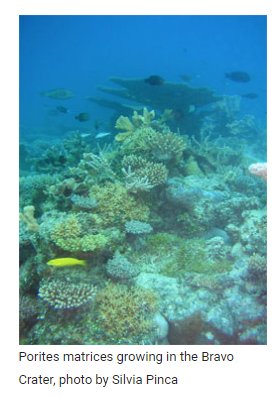 See the graphic Science Vs. Environmentalism

The Bikini Atoll Castle-Bravo nuclear test March 1, 1954 hydrogen test created a blast of 15 megatons and a fireball 4 miles wide. From 1946-1958 Bikini Atoll was the site of 23 nuclear detonations including the underwater Baker blast of 1946. That blast smashed target ships to junk, wrecked ships leaked tons of oil into the lagoon, corals and sand vaporized, and a two mile wide steam cloud filled with radiation levels so high that the US military was in shock. Surviving ships were so radioactive most had to scuttled.

"Code-named Castle Bravo, the nuclear bomb was the most powerful ever exploded at the time, at 15 megatons, making it 1,000 times more powerful than the bomb dropped on Hiroshima in World War II. The massive explosion vaporized everything on three islands, raised water temperatures to 55,000 degrees and left a crater that was 1.2 miles (2 kilometers) wide and 240 feet (73 meters) deep."

Some reports I read said the steam cloud was 50 miles wide. 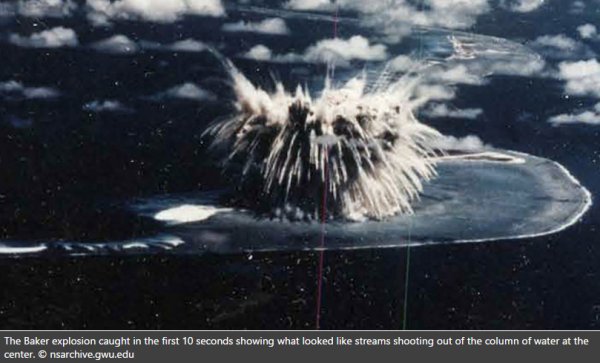 Above the Baker underwater blast in 1946.

After all of this one would expect a nuclear biological desert in this lagoon, yet as of 2008 those bomb craters are full of corals and sea life and host healthy fish populations. Oddly, I can't find anything up to date on the lagoon other than denunciations on biodiversity hype and the atoll can't support human life due to lingering radioactivity. Tell that to the lush plant life, trees, birds, and fish that live there.

Ms. Thompson at the end of the article went into another rant on climate change killing coral reefs. Do we accept empirical scientific proof or computer model hypothesis from those hostile to human life on their sacred Earth?

Above the Baker underwater blast in 1946 leaves wrecks leaking oil into the logoon.

I've tracked Bikini Atoll since I was in the army and this recovery is amazing; "huge matrices of branching Porites coral up to 8 meters (25 feet high) had established, creating a thriving coral reef habitat...Throughout other parts of the lagoon it was awesome to see coral cover as high as 80 percent and large tree-like branching coral formations with trunks 30 centimeters (12 inches) thick."

So says Zoe Richards of the Australian Research Council Centre of Excellence for Coral Reef Studies and James Cook University. The hysteria over nuclear radiation is also blown all out of proportion.