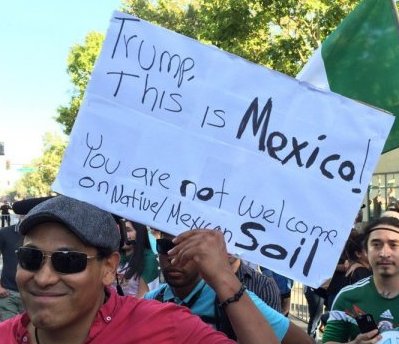 According the Yellow press opposing this behavior is racism.

Gracing the Bristol Herald Courier the hysterical yellow press claimed Trump attacked Mexicans. That was part of yellow journalist' Dana Milbank's ranting and I believe race pimp Leonard Pitts. But what did Trump really say and was it factual? Facts are not racism.

That is not an attack on ALL Mexicans, but on the policies of the Mexican government and factually states what they are doing. This came directly based on information from news reports put out by the same yellow press attacking Trump for violating political incorrectness. He refers to crime and chaos along the border and is factual.

Mexico does send its undesirables. Mexico, like Latin America in general, is a failed culture and borders on a failed state. The culture of its masses of rural peasants, Indians, etc. leaves them the least educated and thus least productive. The problem is so bad the Mexican government has tried to pay their families to keep their kids in school - Mexican culture is antithetical to education. To quote,

Mexico's poor educational achievement is at the heart of why this nation of 100 million has remained stuck economically on the ladder of nations. Unable to compete with better-trained workforces elsewhere, Mexico has largely settled for a niche in low-skilled assembly jobs. Now it is even losing those to China, where low-skilled workers are paid less. Business leaders here are pleading for an education revolution.

A generation ago, Mexico and South Korea ranked near the bottom in academic achievement among the 30 nations of the Organization for Economic Cooperation and Development, said OECD official Andreas Schleicher. Today, among people age 25 to 34, Mexico ranks last in the same OECD studies, while South Korea has risen to No. 1. South Korea's highly skilled workers produce some of the world's most popular cars and electronics, but Mexico's workforce still relies largely on sweat.


13 years later more of the same. Mexico has given up trying to educate these masses of backward peasants in their failed culture. They have even tried paying parents $65 a month to try to get them to keep their kids in school. (Yes Mexico has schools and yes there are smart Mexicans.) Doesn't work, so they encourage them to move north and stick us with that failure. They even print 'how-to" comic books telling them how to break into our country, avoid the border patrol, and what to do if caught:

The Mexican government drew fire from American advocates of tighter borders on Wednesday for publishing a pamphlet that instructs migrants how to safely enter the United States illegally and live there without being detected. Officials here say the small booklet, illustrated in comic-book style, is not intended to encourage illegal immigration, but to reduce the loss of life.

So it is factual that the Mexican government is taking an active part in unloading its unwanted population onto the United States. There is no doubt this tidal wave of peasants bring crime and drugs in their midst. Fact: of the worlds 50 most violent cities 43 are in Latin America and 10 of those are in Mexico. There's no way to deny the culture of crime and violence in Mexico that has left tens of thousands dead. But what about rapists among their undesirables Mexico and other Latino nations encourages to come here?

About 60 per cent of all illegal female immigrants are estimated to face some kind of sexual violence The assaults usually go unreported over fears of deportation and reprisals against family. They happen on both sides of the border and have even been at the hands of at least one U.S. Border Patrol agent...

'An estimated six out of 10 migrant women and girls experience sexual violence, allegedly prompting some people smugglers to demand that women receive contraceptive injections ahead of the journey, to avoid them falling pregnant as a result of rape,' Amnesty International reported.

'Migrants in Mexico are facing a major human rights crisis leaving them with virtually no access to justice, fearing reprisals and deportation if they complain of abuses,' according to a researcher for the human rights organization.


Also to quote even worse statistics:

According to a stunning Fusion investigation, 80 percent of women and girls crossing into the U.S. by way of Mexico are raped during their journey. That's up from a previous estimate of 60 percent, according to an Amnesty International report...Rape can be perpetrated by anyone along the way, including guides, fellow migrants, bandits or government officials, according to Fusion. Sometimes sex is used as a form of payment, when women and girls don't have money to pay bribes.

The assaults are so common that many women and girls take contraceptives beforehand as preventative measures. What's particularly disconcerting is that the fact that these figures may not even represent the full grim picture.

So Trump is 100% correct based on what he actually said, not the lies pushed by the yellow press.