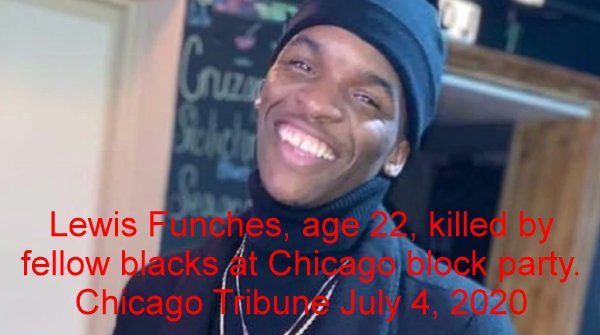 Chicago has a black Democratic Party Mayor Lori Lightfoot. She is incompetent and has ruled Chicago since 2019. Hundreds have been shot and killed under her rule. 1,781 people have been shot killed-wounded in 2020 as of July 1.

The Democratic Party has ruled Chicago for decades.

Meet Lewis Funches a nice young black man. The 22-year-old dreamed of being a Chicago police officer and was a dancer. He is dead. He was shot June 27, 2020. He was killed by a fellow black trying to kill other black(s).

This mass shooting claimed 4 black victims - 2 dead, 2 wounded. June 2020 Chicago saw 88 shot and killed and another 468 wounded. That is nearly a 100% increase over June 2019. Those mostly black lives don't matter when blacks pull the trigger.

As of 6/22/2020 Chicago has suffered 53 mass shootings of three or more victims, another 171 involving 2 victims. Those black lives don't matter either.

A 7-year-old girl was fatally shot in the head Saturday evening...Police said she suffered a gunshot wound to the forehead...The girl was out of town and visiting her grandmother...She was outside with others during a family gathering. Three (black) men got out of a white vehicle about 50 feet away from where the girl and her family was and fired at least 20 rounds at them...

A second victim a 32-year-old man was shot in the ankle.

Another black life that doesn't matter. To further quote on black children being shot by feral blacks:

The shooting Saturday follows the wounding Tuesday night of a 3-year-old girl in the West Englewood neighborhood minutes after a 15-year-old boy was shot blocks away, after a 20-month-old boy and 10-year-old girl were killed in separate attacks last weekend. A week earlier, five children were fatally shot, including a 3-year-old boy.

Where the hell are the police? Where the hell is Black Lives Matter? BLM is a fraud - they care nothing about dead black kids. They are a Marxist hate group, nothing more. 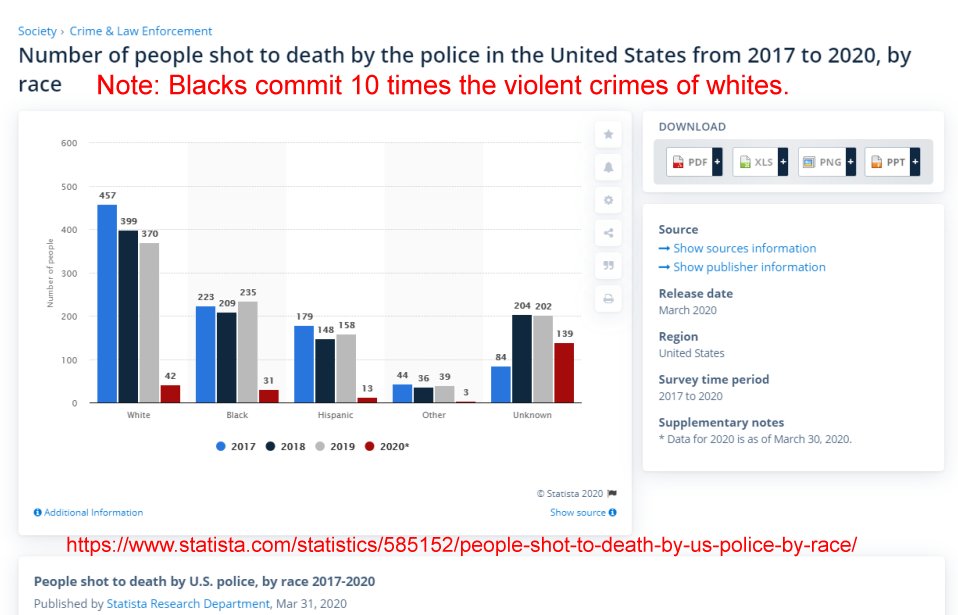 According to the Chicago Tribune there have been almost 40,000 murders in Chicago since 1957. It is mostly blacks and Hispanics killing each other.

In 2019 10 unarmed blacks were shot by police, 2 officers were charged. Whites are far more likely to be shot-killed than blacks even though blacks commit 10 times the violent crime. Ref. Washington Post.