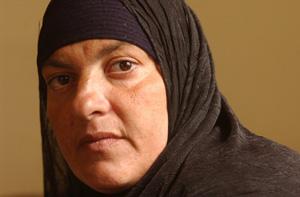 This women murdered her own child!

Women's Non-Existence in the Arab World

Having been raised watching only Western media, I knew very little about the Arab world except what I had seen and thought to be true on the television screen. I, being an eager open-minded 16 year-old girl, wanting to participate and be an active member of society, also ready to explore the world of men began dating at that very age.

I made one of the biggest mistakes I will forever regret until the day I die. I met Arab men. They are the biggest mistake God ever created on the face of the Earth. Little did I know that in Arab culture, women had no place in humanity. Not only was I not allowed to think, speak or work for myself. I was only able to talk when I was told to, was largely humiliated and ignored when I did speak, was forced to submit to Arab sexual demands and was told not to work nor be sexually autonomous in deciding how many or how little partners I could or could not have.

I was not allowed to so much as change my mind on issues, converse intellectually, watch television, read, write, go outside when I chose to, alter my physical appearance when I chose to, speak on issues of history, religion, or politics.

I was given but two privileges, if privileges are what you'd call them: submit to Arab misogynist sexual demands and serve the Arab man's every need, want or desire.

Women, in Arab culture, are taught from birth that their only purpose in being is to serve male copulation and male desire. Women are forbidden to have male friends, multiple husbands or boyfriends at a time, must cover from head-to-toe or will be seen as asking for rape.

Women's sexual autonomy is forbidden, as women are not allowed to objectify men, although, hypocritically men can objectify women. She cannot exploit men but men are allowed to exploit them. I was forbidden to do anything except breathe oxygen.

The Arab men also swindled every dollar I had (Arab men are incredibly lazy and irresponsible) to try to immigrate to several European countries and rape European women. Arabs believe the only purpose women serve is satisfying male orgasm. They believe an independent woman, free to live her life for herself and be sexually autonomous, that is, to break as little or as many male hearts as she desires, is the ultimate sin in Arab culture.

Women being sub-human creatures, especially in the Arab world, are seen as unfit and immature to participate in society because of their caring, nurturing, maternal nature, which enables them to function improperly in society. A woman's forgiving; caring, loving, generous nature disables her completely to function fully.

Arab men took away my very right to exist, my very right to speak and breathe. I was a prisoner inside my own body and mind. I had never felt more tortured emotionally and spiritually than ever before in my life and growing up in the West, I was not accustomed to such treatment. I was even more angered to find the Arab man who had hurt me, not only was able to immigrate to Canada (while the Native Berbers were forbidden entry), but had abused a French-speaking Canadian woman as well.

I have been severely hurt and bruised that even as I make the transition forward with my life, this time with a man who truly admires and respects me for who I am, I am still haunted by my traumatic experiences. And it hurts both my partner and I although I honor his existence more than my own.

I would like to raise awareness to women around the world who have been abducted, beaten, or raped by Arab men and misinformed of their low view of women to share their stories and send me emails personally at aldahia905@hotmail.com

I only hope that women, although afraid, weak and dying, come forth and speak the truth of their Arab abusers, although women around the world fear being ostracized,

I believe sharing our experiences, raising awareness and at the very least complaining is the first step to healing ourselves.

In Canada, Sharia law has been secretly passed and infringes on the rights of Muslim-Canadian women whose civil liberties in a supposedly free Western country will be walked upon even with the Canadian Charter of Rights and Freedoms.

Ariell Choy is a college student, a poet and a writer. She can be contacted at aldahia905@hotmail.com