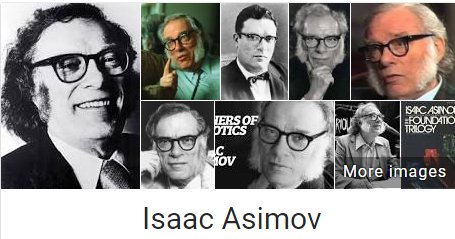 Asimov's fiction is never hostile to religion. Asimov served as president of the American Humanist Association. For a long time he described himself as an agnostic, but later said he was an atheist.

...he never believed in either God or an afterlife. He considered himself a Humanist... Asimov was a strong proponent of scientific reasoning who adamantly opposed creationists, religious zealots, pseudoscience, and mysticism.

Asimov did not oppose genuine religious feeling in others. He did, however, have little patience for intolerance or superstition masquerading as religion. Although he was an atheist, Asimov was proud of his Jewish heritage. His parents never made an effort to teach him religion.

He did study in Hebrew school for several months while his father served as secretary for the local synagogue, where he learned some Hebrew and how to read Yiddish. Asimov did have a great interest in the Bible, and wrote several books about it, notably the two volume Asimov's Guide to the Bible and The Story of Ruth.

During his presidency of the American Humanist Association, Asimov was opposed to the Protestant sub-group known as Evangelical Christians. Asimov felt that all Evangelicals were "fundamentalists": narrow-minded, Bible-toting bigots, responsible for most of the world's ills. Asimov dismissed Evangelicals as anti-intellectual and dangerous.

Evangelicals "think that all of knowledge will fit into one book called the Bible. and refuse to allow that there is even the conceivability of an error in there." (The Humanist, Jan./Feb. 1989, p. 5).

From "Isaac Asimov on Science and the Bible", interview with Paul Kurtz, published in Free Inquiry, Spring 1982:

I believe there's enough evidence for us to think that a big bang took place. But there is no evidence whatsoever to suppose that a superhuman being said, "Let it be." However, neither is there any evidence against it; so, if a person feels comfortable believing that, I am willing to have him believe it... as an article of faith.

We will never get to the point where it suddenly stops making sense. But that is just an assumption on my part...

I think this is a choice for every human being, and frankly I think that perhaps if you don't believe in God this puts a greater strain on you, in the sense that you have to live up to your own feelings of ethics. But, if you do believe in God, you also believe in forgiveness. There is no one to forgive me.

In the same interview, responding to the question, "Isaac, how would you describe your own position? Agnostic, atheist, rationalist, humanist?", Asimov answered:

I am an atheist, out and out. It took me a long time to say it. I've been an atheist for years and years, but somehow I felt it was intellectually unrespectable to say one was an atheist, because it assumed knowledge that one didn't have.

Somehow it was better to say one was a humanist or an agnostic. I finally decided that I'm a creature of emotion as well as of reason. Emotionally I am an atheist. I don't have the evidence to prove that God doesn't exist, but I so strongly suspect he doesn't that I don't want to waste my time.

The fact that Asimov's wife Janet was a Mormon may have something to do with the inclusion of a clearly pro-LDS joke in one of his books. From: Isaac Asimov, Asimov Laughs Again: More than 700 Favorite Jokes, Limericks, and Anecdotes, New York City, NY: HarperCollins Publishers (1992), pages 127-128:

The Pope had called together a meeting of the cardinals and said, "I have some good news for you and some bad news. The good news is this. Our blessed Savior, the Lord Jesus Christ, has returned to earth for the long-awaited Second Coming, and the Day of Judgment is at hand."

There was an exalted silence for a few moments and then one cardinal said, "But Holy Father, with good news like that, what's the bad news?" The Pope mopped his forehead with his handkerchief and said, "The information has reached us from Salt Lake City."

Isaac Asimov was an American writer and professor of biochemistry at Boston University. He was known for his works of science fiction and popular science. Asimov was a prolific writer who wrote or edited more than 500 books and an estimated 90,000 letters and postcards. Wikipedia

Violence is the last refuge of the incompetent.

Life is pleasant. Death is peaceful. It's the transition that's troublesome.