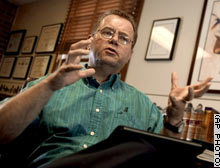 A school official recently instructed the biology teacher to stop using the book.

ABINGDON - The title of the homemade textbook alone, "Creation Battles Evolution," should have raised eyebrows.

But no one complained in the 15-plus years that teacher Larry Booher distributed the 500-page text, which counters the theory of evolution and says that God created the universe. School officials say they had no idea about the book in the Biology 2 class at John S. Battle High School in Washington County.

Last month, a man identifying himself as a freelance writer from Charlottesville called Washington County Public Schools Superintendent Alan Lee to report that a teacher at John S. Battle High School was presenting a Christian view of the origin of life in class. The writer had obtained a copy of the teacher's source book from a former student.

Lee has since directed Booher to stop using the book and scheduled a professional development day for all county teachers and administrators on the separation of church and state. He is instructing principals to talk with every faculty member on "expectations of what they teach and how they teach. "I'm going to direct them in being proactive in discovering any personnel who might have stepped across the line." The revelation about Booher's book comes when the debate over teaching evolution in public schools has re-emerged around the country.

In October, a Dover, Pa., school board voted to require ninth-graders to learn about "intelligent design" - a new form of creationism - in biology class. In May, the Kansas Board of Education began hearings to reconsider the teaching of evolution. Both cases made headlines and fueled the debate.

This is not the first time Washington County has been the seat of controversy. Over the past 30 years, community members have tried to add creationist textbooks to public schools and ban novels from the public library, leading at one point to national media coverage.

Booher said the Biology 2 class where he distributed the book was an elective for juniors and seniors. The class included lessons on genetics, evolution, anatomy and animal behavior, and did not require that Virginia Standards of Learning material be taught. Rather than a regular textbook, Booher based his lessons on outside research and materials.

His source book was optional, although he gave extra credit to students who read it. The book, which he compiled into three-ring binders and distributed at his own expense, includes nine chapters with names such as "In the beginning" and "Evidence for a young Earth" and is primarily a compilation of material from other sources.

Booher said he told students, "Here's the evidence. Make up your own minds what you want to believe." He now regrets having passed out the material. "I can't change my classroom into a Sunday school class," he said.

Booher, 48, grew up in Bristol, Tenn., and received his bachelor's degree in the same community at King College, a Presbyterian-affiliated college. For 25 years, he has taught at John S. Battle High School, where visitors are greeted by a sign in the lobby that reads, "In God We Trust."

He became a biology teacher he said because of his interest in science and his joy of working with young people. He declined to talk about his religious beliefs, saying he did not think it would be appropriate. Over his six years as superintendent, Lee said he has been awed by Booher's teaching skills and knowledge of biology. On classroom visits, he said he has been so transfixed by the teacher's lessons that he has stayed for entire class periods. He said he never saw the source book used in class and "didn't know it existed."

In her 11 years on the Washington County School Board, chairwoman Elizabeth Lowe heard "not a word" about Booher's book, she said. At the school board's Monday night meeting, the first since Booher's text came to light, the issue did not come up. "It's not like I've tried to make it a secret," Booher said. "If administrators knew, fine. If they didn't, I didn't make an issue of it." He was not aware he may have blurred the laws governing separation of church and state because his materials were optional. "I don't teach like a Sunday school teacher would teach," he said. "The approach is to teach both positions from a scientific basis."

Though school officials said no one complained about the book, people knew about it. John Graves, former county PTA council president and member of a "pretty conservative" church wrote in an e-mail that he disagreed with much of the text his son brought home from Booher's class several years ago. He is "certain that many of the primary sources he used have been discredited." But Graves didn't voice dissatisfaction when his son was in the class. "While I may disagree with much of it, I also wanted my son to be exposed to a variety of viewpoints."

Elizabeth Fairbanks, co-president of the Washington County Education Association, said she learned about the text in August when she had an occasion to teach with Booher. She did not want to comment further for this story. Lee said a large portion of the community would probably favor continued use of the book. "I have to look at the legal ramifications," Lee said. "I believe there were personal religious beliefs expressed, and I don't think that's appropriate for a classroom."

The U.S. Supreme Court has ruled that governments must remain neutral on issues relating to religion and that state laws cannot endorse a religion, which means that public schools cannot teach creationism. At the state level, Virginia's SOLs require lessons on evolution and "scientifically validated theories," said Julie Grimes, spokesperson for the Virginia Department of Education. State officials would not comment further on Booher's book.

Others did weigh in on the debate. "The students at that school are getting short-changed," said Eugenie Scott, executive director of the National Center for Science Education in Oakland, Calif. She said administrators need to clarify Booher's job duties to him: "Scientists don't argue over whether evolution occurred."

The incoming Virginia Tech freshman said Booher handed out his source book at the beginning of the academic year and taught "from a more Christian point of view." Leonard liked this because "most teachers teach from the evolution, and he did more of the creation."

But she said it is probably good that school officials stopped distribution of the materials "because now people have such different religious backgrounds that it could be really discriminating against them."A plaque in the entrance hall at John S. Battle High School proclaims "In God We Trust."

What the Supreme court has ruled U.S. Supreme Court has supported separation of church and state. In 1968, the high court ruled in Epperson v. Arkansas that a state statute making it unlawful for public school teachers to teach "that mankind ascended or descended from a lower order of animals" violated the establishment clause of the First Amendment requiring governments to remain neutral on the issue of religion and prohibiting state laws that endorse a religion. The high court determined the law had been drafted by a group whose religious beliefs were in conflict with evolution.

In 1986, the high court ruled that Louisiana's "Creationism Act" forbidding the teaching of evolution in public schools violated the establishment clause because the law was meant to discredit evolution and advance a religious belief.

The Roanoke Times Excerpts from "Creation Battles Evolution" Index to Larry Booher's biology text book he compiled and was using for his classes. "There is no real scientific evidence that a so-called 'big bang' ever occurred." "Skeletons of modern man occasionally have been discovered in rock dated by evolutionists as lower Tertiary, much older than man's supposed ape-like ancestors."

"... evolution is, in reality, an unreasonable and unfounded hypothesis that is riddled with countless scientific fallacies. Biblical creationism, on the other hand, does correlate with the known facts of science. ... The widespread influence of evolution is largely responsible for our moral decline of recent years. ... Herein lies the awesome danger of this Satanic delusion ..."