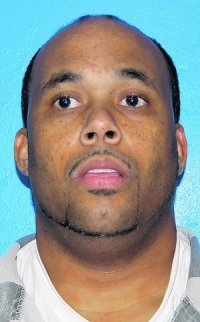 Date: January 6, 2013 - Feral black male Antonio Johnson, age 35 of Kingsport, is charged with one count of attempted murder and three counts of aggravated assault according to the Sullivan County Sheriff's Department.

The shooting stemmed from an argument Johnson was having with a relative of his girlfriend. Witnesses claim Johnson fired at least two shots from inside his vehicle in the direction of the victim. Three other people were outside the home at the time but nobody was injured according to police. His vehicle was spotted a short time later and he was taken into custody.

He faced additional charges later because the gun turned out to be stolen. Guess he didn't get his background check. This was the same story when feral black male Michael Bunch shot a stranger at a Kingsport Waffle House News Years morning in 2012 also with a stolen gun. See Feral Black Male Opens Fire at Kingsport Waffle House. In neither of these cases was any so-called assault weapon involved.

Once again this illustrates the primary source of most gun violence in America are feral minority males. In cities such as Chicago where on a typical weekend 30 or more people are shot and 300 public school students are also shot in a typical year, nearly all of this violence is caused by racial minorities. The demands of gun control advocates of stripping all citizens of their gun rights will do nothing to slow down this reign of minority crime, terror, and violence.

In Chicago on New Years day 2013 15 people were shot before 5 AM - three fatally. Chicago already has draconian gun laws that work wonders to disarm law-abiding citizens. These killings seldom result from so-call 'assault weapons', which are illegal in America anyway. Chicago closed 2012 with 506 homicides.

In a typical year 300 Chicago public school students are shot - often victims and shooters are low achieving non-Asian minorities. That is three times all the high profile and rare mass shootings such as Newtown Ct., Aurora Col., etc. combined.

We also must recall that racial minorities are also the primary victims of minority crime. The refusal to properly police these communities and to install the rule of law is the worst form of racism. Nobody cares how many black kids get shot, but go crazy when some mentally ill idiot shoots up a school full of white children. We don't need gun control, we need crime control. We need to remove the criminal, mentally ill, and dangerous from the streets. Law-abiding citizens have rights too!