We hear constantly how Texas has created a whopping 279,000 jobs from 2007-2011. This might be something to celebrate with the lousy 80,000 jobs created across the whole nation June 2012. What has been hidden from the spotlight in Texas and the nation in general is the majority of job growth, what little there is and ignoring the depressed pay scales across entire industries, is native Americans aren't getting the jobs.

A study released in September 2011 by Steven A. Camarota of the Center for Immigration Studies (CIS) shows 81 percent of those "new jobs" in Texas went to immigrants at least half illegal. It's part of a three-decade long pattern of displacing the native born workforce with cheaper imported and often illegal labor. Of those jobs taken by newly arrived immigrants, 93 percent were non-citizens. CIS also found the following:

* Of jobs created in Texas since 2007, 81 percent were taken by newly arrived immigrant workers (legal and illegal).

* Of newly arrived immigrants who took a job in Texas, 93 percent were not U.S. citizens. Thus government data show that more than three-fourths of net job growth in Texas were taken by newly arrived non-citizens (legal and illegal).

* The share of working-age natives holding a job in Texas declined significantly, from 71 percent in 2007 to 67 percent in 2011. Tis decline is very similar to the decline for natives in the United States as a whole and is an indication that the situation for native-born workers in Texas is very similar to the overall situation in the country despite the state's job growth. 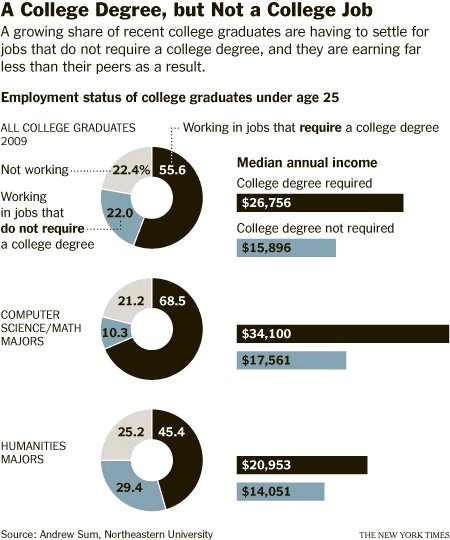 See The Downsized College Graduates at the New York Times

The above illustration shows the massive decline for even college graduates both in pay and job availability. But vast numbers of these immigrants are not just knocking the bottom of the job market for those without advanced degrees, but 4-year graduates as well. Mr. Camarota notes,

Immigrants took jobs across the educational distribution. More than one out three (97,000) of newly arrived immigrants who took a job had at least some college. These numbers raise the question of whether it makes sense to continue the current high level of legal immigration and also whether to continue to tolerate illegal immigration.

This means the vast numbers of diversity brainwashed college graduates could ignore these destructive job trends in the past because the main losers were blacks and blue-collar whites, but now it's them.

For the nation's elite in both political parties this situation is a win. For the Wall Street Republicans continued destruction of the labor market through lower and lower pay means more profits. For the Democratic Party socialists exploding and maintaining the large numbers of low-achieving and welfare dependant non-Asian minorities is simply seen as a political opportunity to expand their power.

We must get beyond the race-hustlers and Wall Street money if American labor and workers of all colors are to have a real opportunity for a future. Posted July 12, 2012.

This is an archive page. It is kept as a historical record and will not be updated. This format is usable on cell phones, tablets, and a normal PC.

The following are gateway pages to my three websites.